While re-reading the entire Sandman series from Vertigo this weekend, I found this John Constantine trading card from 1994. It had been safely encased in the original sealed plastic envelope for more than two decades now, like some kind of hell-blazing time capsule. So, what the heck. Why not rip that puppy out and put it on the Internet?

Someone left a copy of DMZ #2 on the top secret fifty cent rack a few years ago. They inadvertently introduced us to a series we would now include in our Top Ten Favorite Comic Book Series. DMZ tells the story of young journalist Matty Roth’s increasingly tragic involvement in the next civil war on U.S. soil. Most of the story takes place in a war-torn New York city, a nominally demilitarized zone (DMZ) between the secessionist forces and the U.S. government’s forces – military, mercenary, and otherwise.

The 75-issue series breaks up into short stories lasting five issues with several shorter character studies interspersed between the main arcs. You can buy it as DMZ single issues, which other than a few early issues is not much more expensive than if you had purchased them new, or a series of trade paperbacks. Vertigo is, at the time of this post, three books into a deluxe hardcover edition which collects about 12 issues per volume. I had the single issues, which you can see in this post’s somewhat random photos. 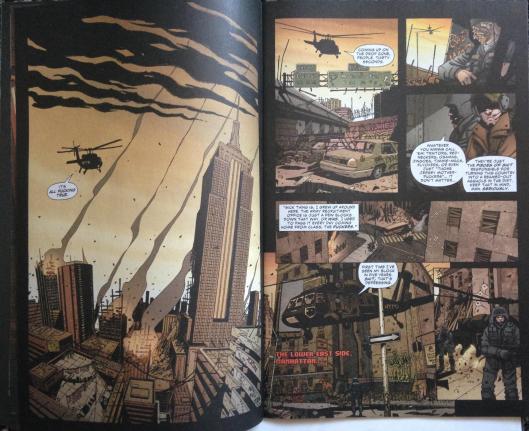 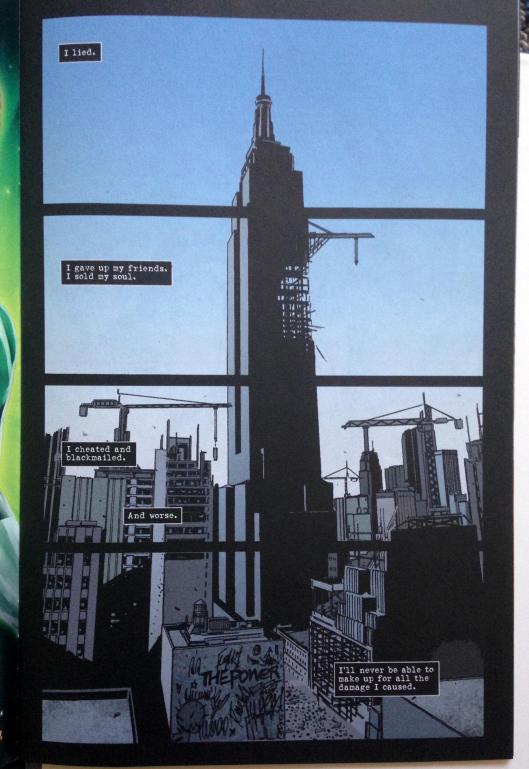 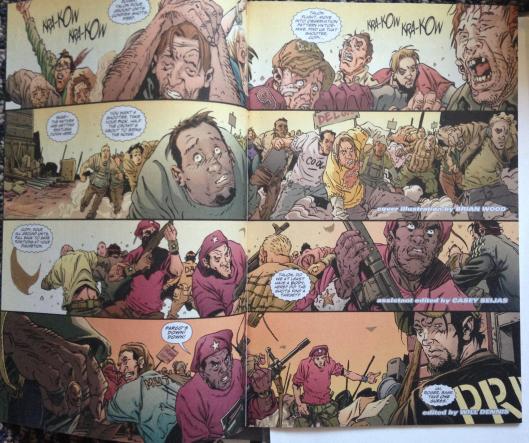 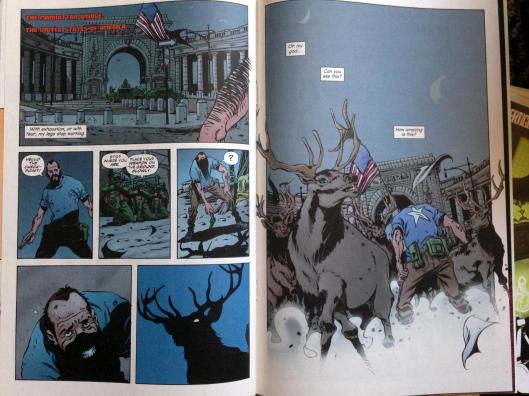 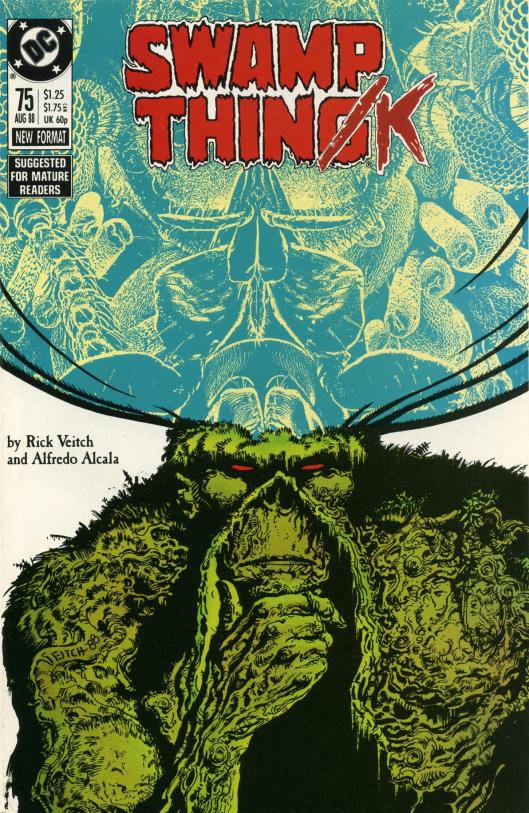 Swamp Thing #75, part of Rick Veitch’s run on the title, remains a favorite of ours due to the lavishly large panels full of Swampy’s psychedelic ponderings on life, the universe, and everything. Swamp Thing sits down and grows a bigger brain to consider a thorny problem; namely, how to find a host for the spirit of the next elemental force of The Green. Long-time fans will know this elemental force eventually takes the form of his daughter, a character Brain K. Vaughn would develop in his time on the series.

We recently sold our Swamp Thing comics collection on eBay but had to scan this bad boy before it went off to its new home. Enjoy! 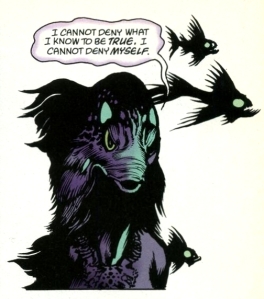 Fans of the classic Swamp Thing and Miracleman tales know the artwork of John Totleben. Here is a more recent Totleben classic that might have slipped under your radar. In this issue of the Sandman-related series Dreaming, author Caitlin Kiernan tells a compelling story about one woman who challenges her society’s notions of truth.

The woman is a fish named Lady Tethys, after the single great ocean that surrounded Earth’s land mass when it was all gathered into the super-continet Pangaea. An object from the realm of dreaming falls into her sub-oceanic environment. But, the leaders of her city refuse to even admit its existence, as it is forbidden to speak of there being anything “above” the ocean. Totleben’s masterful artwork nails the bittersweet emotional tone of Kiernan’s tale.

The modern incarnation of The Losers is our favorite action series of all time. If you saw the movie and think you know this comic book, then think again. If you like crime comics, this will be at the top of your list, too. We’re big fans of Ed Brubaker & Sean Phillips’ Criminal, too, if that gives you any idea of our taste in crime comics!

When the Losers, once an elite U.S. Special Forces Unit, stumbled onto the C.I.A.’s dirty little secret, their refusal to play along got them murdered…or so the C.I.A. thought. Now the Losers are back, and out for payback against the organization that stabbed them in the back.

In the numbing cold of a Minnesota winter, Jessie Kidby and her freshman friends kick off their second semester with a wild party. But in the aftermath of the big blow-out, things start to go horribly wrong for all of them.

Nasty, supressed memories trouble Jessie, while her best friend Nick Philo has become an un-person. Nobody outside their tight-knit little clique can remember seeing Nick before. His records have been erased from the college’s computers. At first, it doesn’t seem like a big deal – but it becomes increasingly obvious that one of them is not what he appears to be.

Chock full of ruthless characters with hidden agendas, Faker takes place during freshman year in college; the ultimate time of reinvention, where, if you’re up for it, you can lie, cheat, and fake your way through almost anything.

Let’s enjoy the freaky party scene where everyone gets trashed on cocktails in the chemistry lab – and its unpleasant aftermath!

Story by Mike Carey, whose scripting we enjoyed so much on Lucifer and Ultimate Fantastic Four, to name a few. Artwork by Jock, who did the art we absolutely loved on Andy Diggle’s Losers. 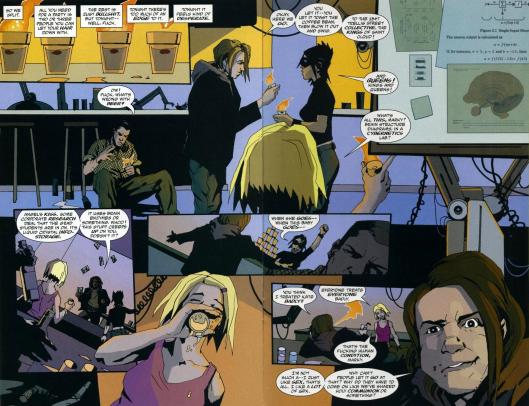 Spend the afternoon on Mars with us. We’ve been Kevin O’Neill fans for years, but nothing really prepared us for the visual ecstasy of the second League of Extraordinary Gentlemen series. If you missed it, check out Kevin O’Neill Does Mars Part 1!

Collector’s Guide:
– From League of Extraordinary Gentlemen 2, #1.
– Cover from the “bumper compendium” reprint.
– Also available in a high-quality TPB format!

If you can’t read the dialogue, that’s because it is reproduced here in its original Martian!

Spend the afternoon on Mars with us. We’ve been Kevin O’Neill fans for years but nothing really prepared us for the visual ecstasy of the second League of Extraordinary Gentlemen series.
If you’d like to see more, visit Kevin O’Neill Does Mars #2.

Collector’s Guide:
– From League of Extraordinary Gentlemen 2, #1.
– Reprinted in a “bumper compendium.”
– Also available in a high-quality TPB format!

If you can’t read the dialogue, that’s because it is reproduced here in its original Martian!