This post is part of a series about what was inside this month’s big box of free comics.

I really wanted to like this story, which is split across the fifth and sixth Conan Omnibuses. I hoped the negative reviews were simply cynical. But I couldn’t even read the whole thing. In the interest of expanding Robert E. Howard’s original tale, this version adds characters I didn’t need, adventures I didn’t care about, and questionable depictions of Conan and his pirate queen. Least believable is how Conan allows himself to be beaten, chained, and imprisoned in a ludicrous subterfuge to plunder a town. This goes against everything we know about Conan’s forceful character. Cloonan, whose artwork I usually love, chose to portray Conan with a slimmer, more realistic anatomy—something more like Steve Rude’s Nexus than your typical comic-book he-man—but that doesn’t fit Conan either. Conan is larger than life, and if there was ever a character who should appear large, intimidating, and insanely muscular, it’s Conan.

Just as troubling was the treatment of Bêlit. She has a crew of strong, skilled sailors who worship her like a goddess, but she lacks the fighting ability we would expect from a battle-hardened pirate. Instead, she gained leadership of the crew by leading them on a somewhat cunning mission in which her main contribution was planning. While I like the idea of Bêlit using her brains and not just her brawn, this approach gives us zero reason to believe her pirate crew would revere her so devoutly. She appears to have a hypnotic sexuality, but it takes more than being sexy to command a pirate crew. She comes across as a horny waif, not a total bad-ass, and that does her a disservice.

The visual depiction of her is even more troubling than that of Conan. Bêlit looks like a raving psycho with madness in her eyes, a slender goth sexpot on the verge of a breakdown instead of a conquering queen of the seas. Though she’s drawn with a nice enough figure, her face could only inspire fear, not love. What exactly does Conan see in her? To make matters worse, the colorists usually make her skin a stark white. She isn’t simply “pale” with “milky skin” as described in the text. She’s been painted bright white like she’s auditioning for Marilyn Manson or the Misfits. (Oddly, her skin is given a normal flesh tone in some scenes or issues, and this just makes the pasty white look seem even more out of place.) The color of Bêlit’s skin is one thing this adaptation should have changed from the original text, because it never made sense to have a sailor with milky white skin. Unless she was a sailor in Arctic seas, she would have been quite tan from exposure to the sun on the deck of her ship. Instead, she is someone’s goth-rock fantasy girl, and Conan is her long-haired boyfriend who listens to Joy Division, and it’s doubtful these two could command a ship, much less conquer many of them.

The story expansion also screws up the final, poignant scene from the original story. Bêlit’s fiery burial at sea is spliced in chunks with an unnecessary scene from after the funeral, where Conan is talking to someone in a tavern, someone who can see what an emotional wreck Conan is. If this scene was entirely cut from the story so we could simply witness the burial, we would know Conan was wrecked because we would be wrecked with him. Instead, we keep getting pulled out of the moment to visit the uninteresting tavern.

That’s just a few of the problems in this adaptation, and despite my enthusiasm about female pirates in general and the original Queen of the Black Coast specifically, I cannot recommend it. 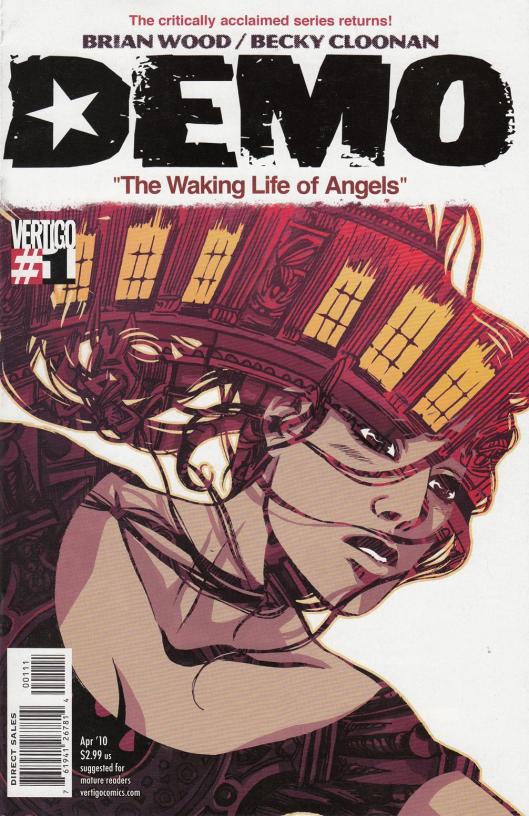 These page come from the beginning of the first issue of DC/Vertigo’s Demo series by Brian Wood and Becky Cloonan. AIT/Planet Lar published a twelve issue Demo series in 2003-2004 before Wood and Cloonan began with a fresh number one at Vertigo in 2010. DC/Vertigo published both series in two Demo paperbacks, and Dark Horse put them together in a single Demo Complete Edition which is 464 pages softcover.

We love Becky Cloonan’s black and white artwork and how she brings to life this dramatic first issue where dreams and reality intersect. Brian Wood is the author of DMZ, one of our favorite series. We did not feel like the target audience for the romantic drama of Wood’s New York Four and New York Five, but we have seen a few issues of Northlanders which interested us, and we enjoyed the three pointless but punk rock issues of Pounded. 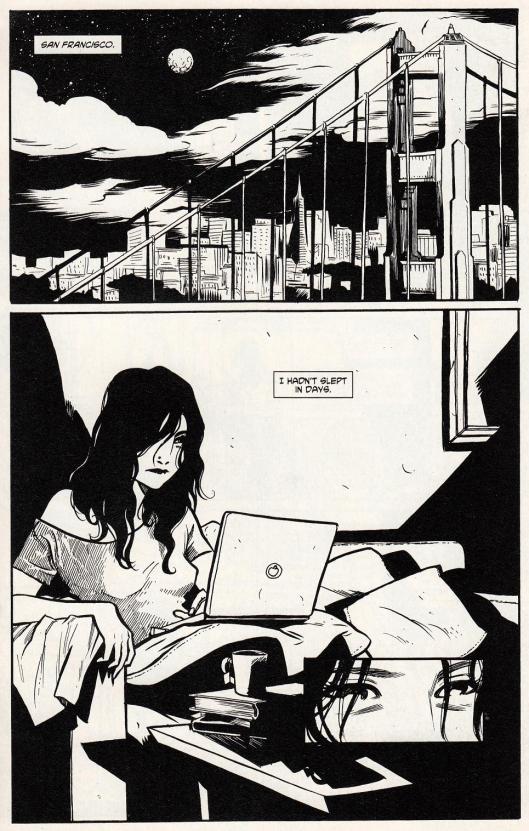 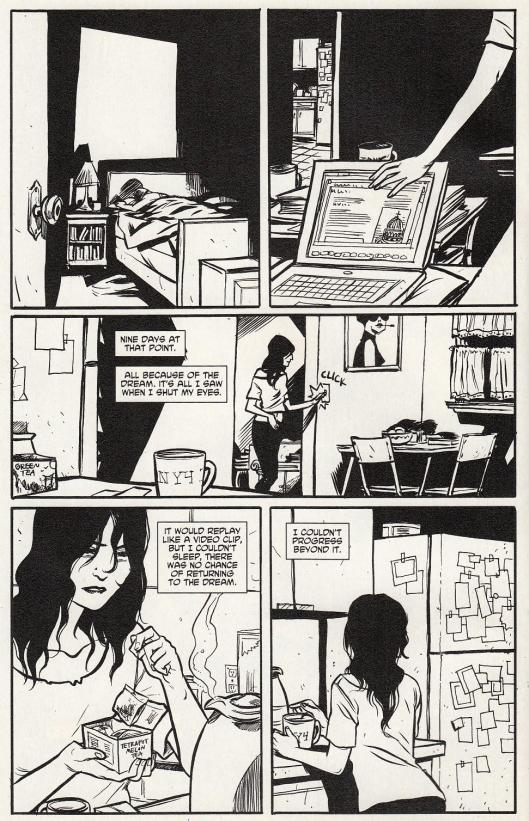 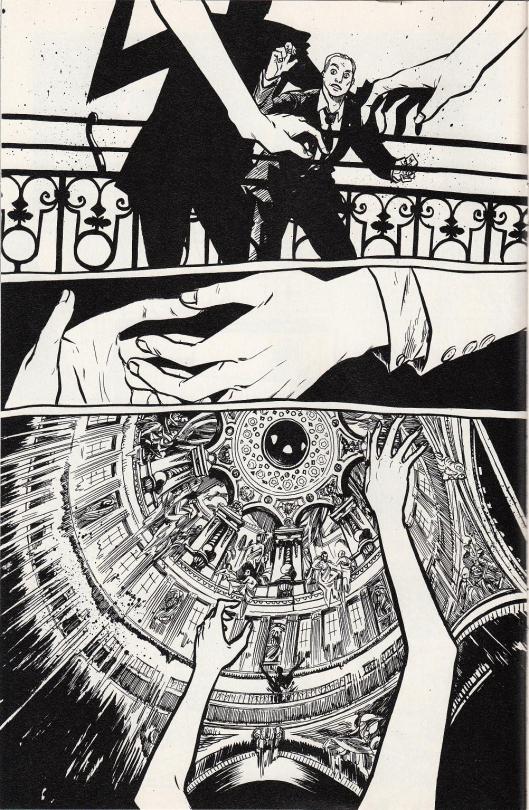 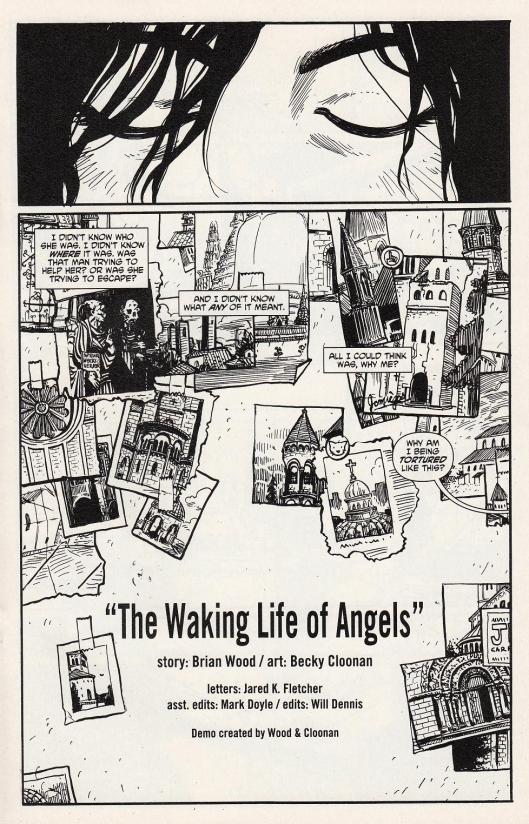