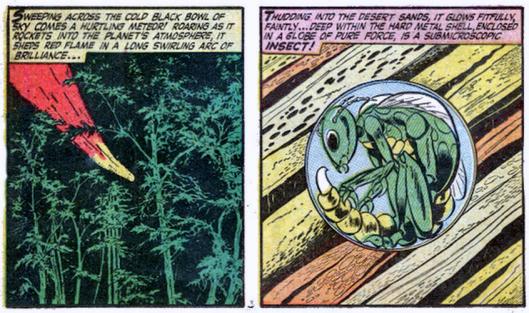 This panel comes from Jet Powers #1; Magazine Enterprises, 1950.
The Thing in the Meteor.
Artwork by Bob Powell.

Bob Powell’s work also appeared in the first issue of Race to the Moon, in the stories The Invasion and Disc Jockey. 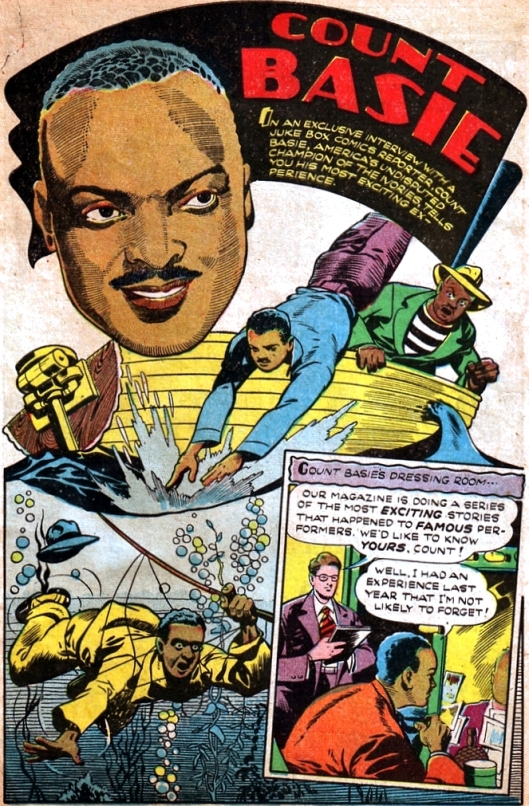 We ran these biographical jazz comics from 1948’s Jukebox by Famous Funnies as a series in our first year here on Mars, but you might have missed them. Now you can read them all in one post!

Retailers don’t often carry these in stock, although you can find a few issues on eBay every now and then. We are so grateful to the Digital Comic Museum for these scans!

Prize published Treasure Comics from 1943-1947. It had all kinds of stories, from humor to adventure to fantasy. Lurking in the pages of the tenth issue you will find a crime story by Jack Kirby and Joe Simon: Tomorrow’s Murder! Kirby and Simon did not stay on the title for long but other greats like Frank Frazetta were also featured in it before its demise. 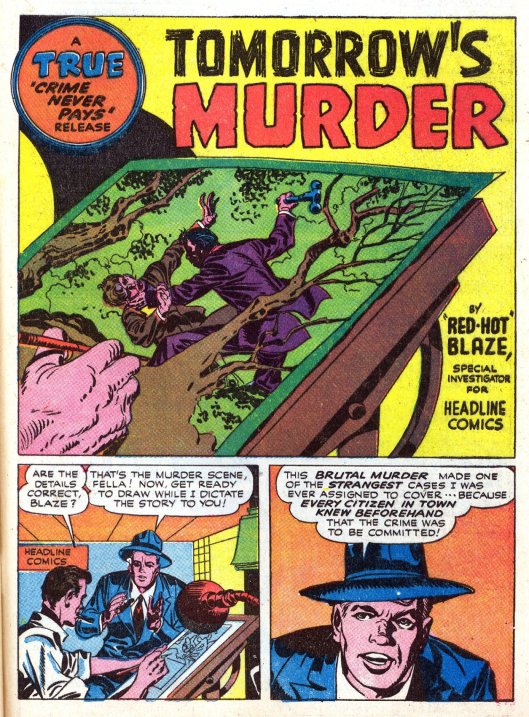 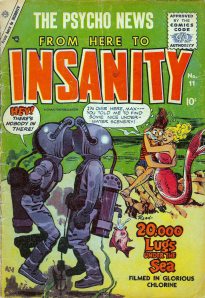 You have enjoyed our 20,000 Leagues Under the Sea posts featuring the Moby Books adaptations and Pablo Marcos artwork. Now, let’s just keep proving that Jack Kirby did it all – including a giant squid! Today you will find in our gallery a six-page story from 1955, published by Charlton Comics, that spoofs the Jules Verne classic.

Just for fun, we threw in a one-page superhero spoof from Uncle Jack, too: Comet Feldmeyer and his lovable companion The Electronic Nuisance! Consider yourself a major geek if you get the “Dial M for Myrtle” comics reference, and move to the head of the class.

Collector’s Guide:
– from From Here to Insanity #11; Charlton, 1955.
All art by Jack Kirby other than four pages out of the 68-page issue.

Underwater adventures also await you in Voyage to the Bottom of the Sea!

One of our guest bloggers, Kandou Erik, covered Captain 3-D by Jack Kirby for us in detail. We refer you to that post! Since then, we found scans of the entire issue you might like to see. Enjoy!

In this nearly forgotten issue of Black Magic from 1950, Joe Simon and Jack Kirby again tackled a subject of great interest to them in those years: dreams.

Mort Meskin and Bill Draut also contribute to this issue. We saw their work alongside Kirby & Simon in Strange World of Your Dreams and other golden age gems. 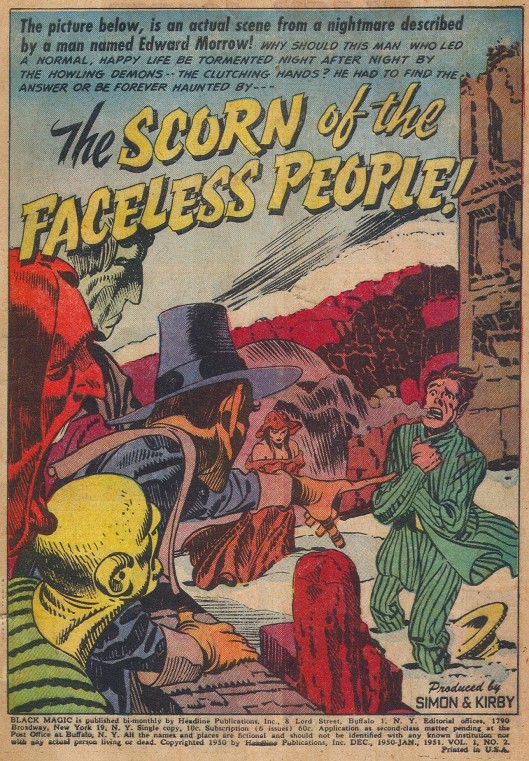 Cover art by Jack Kirby. The Scorn of the Faceless People!, art by Joe Simon and Jack Kirby; dream analysis story. The Cheerful Old Lady in Black!, art by Mort Meskin. The Cloak!, art by Joe Simon and Jack Kirby; Paul Darvas orders a new cloak, only to receive a cursed cloak from Asmodeus himself. Out of Your Mind text story. I’ve Seen You Before, art by Bruno Premiani. Yesterday You Died!, art by Bill Draut; When Grace Hanley is looking to buy a house she sees a ghostly image of a murder that has yet to happen in that house. 52 pgs. $0.10. Cover price

The April, 1954 issue of Strange Tales contains four illustrated shorts and one text piece. Early work by Joe Sinnot appears in The Cask in the Cave. Vernon Henkel provides the eerie artwork for the brief but dramatic Garden of Death! This tale, narrated by Death, scanned a bit better than the other tales. Let’s take a look!

So many things work against this piece of golden age nonsense: disastrous dinosaur depictions, colors fading into putridity, and lots of development to squeeze into four pages. Somehow, they pull it off. This is Bernard Krigstein, isn’t it?

If not, then it’s Paul Reinman, who did the artwork on the totally terrifying… Laundry Machines?

One thing is for sure: First panel, Final page of the story. That is none other than the Free States Leader in DMZ! Yeah! That might be one we want to paint. The Free States Rising chapter of DMZ is one of our all-time favorite story arcs. 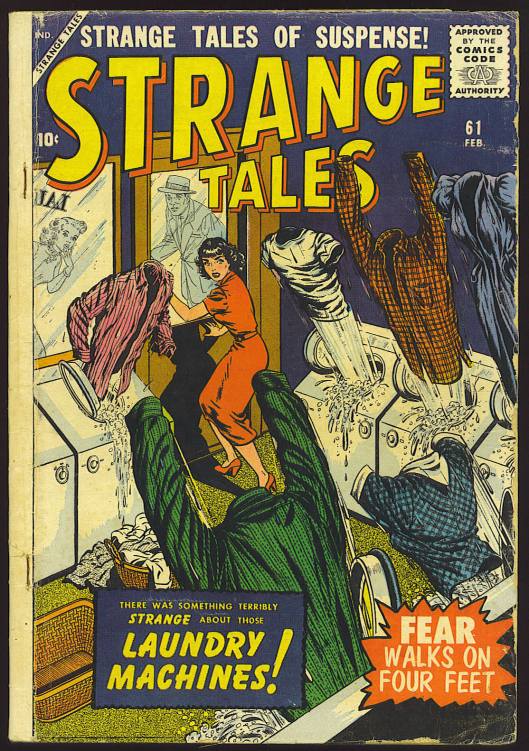 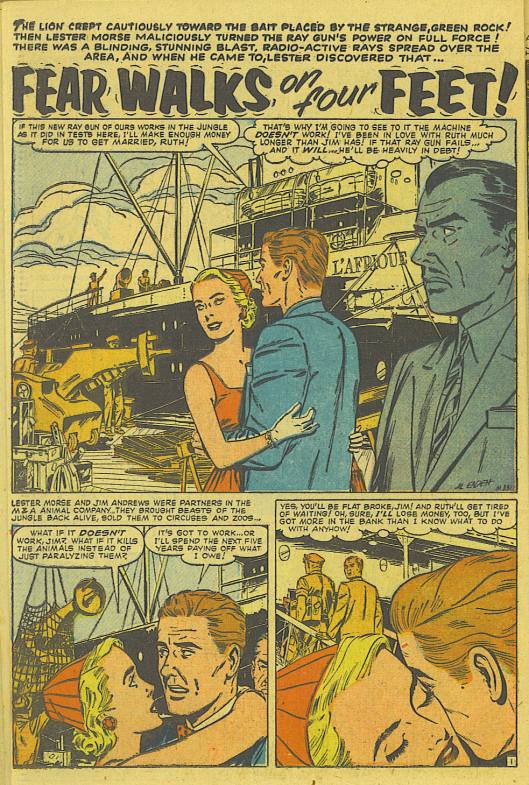 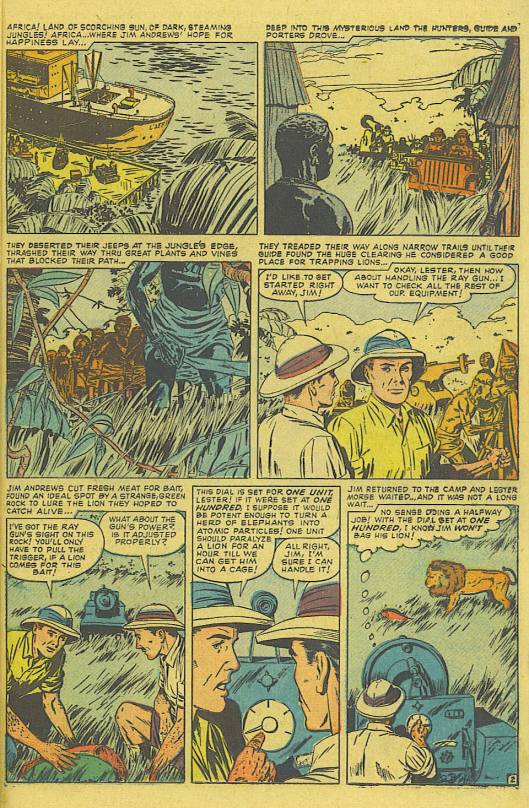 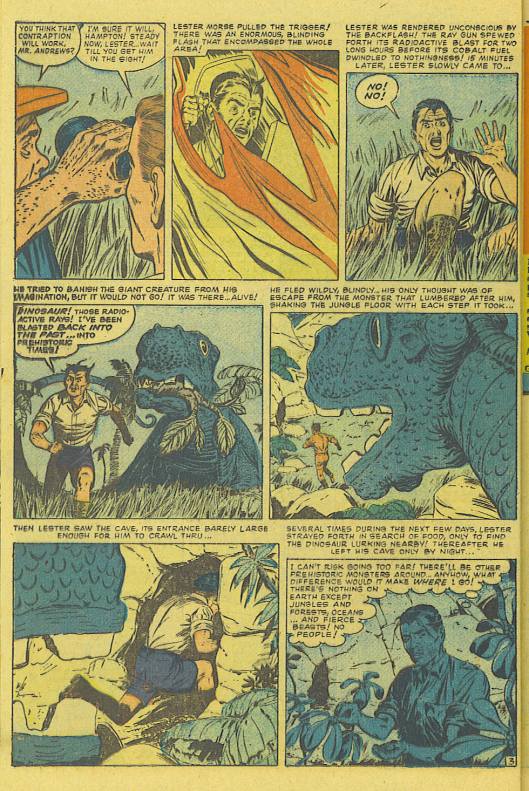 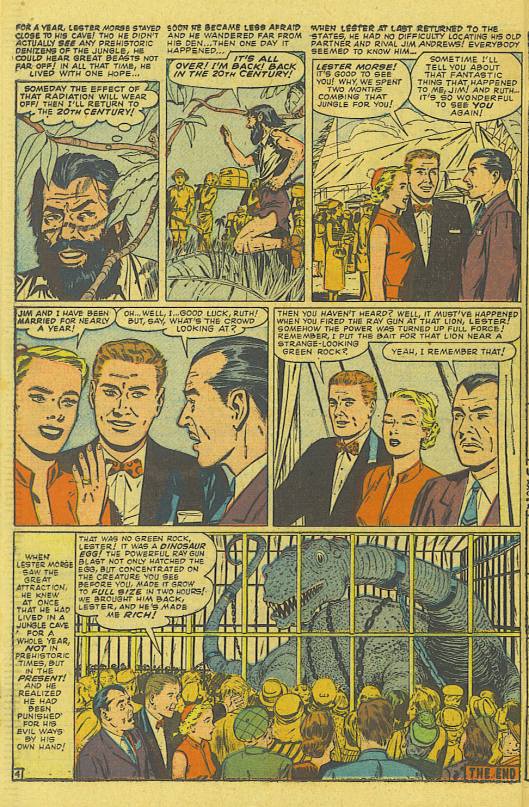 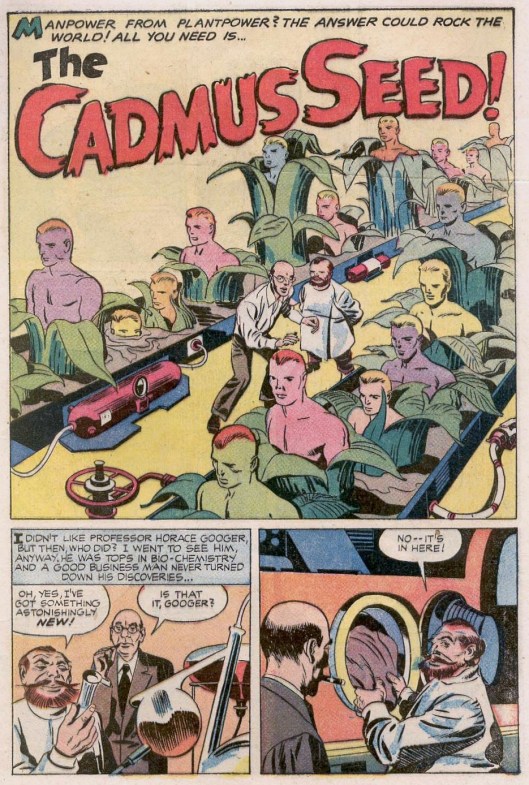 You will see familiar themes like Martians, strange dimensions, conscious robots, and alien worlds. You will witness harbingers of future sciences like genetic engineering and cloning.

And, you will see a few ideas Kirby revisited decades later in his original stories. Behold the walking dogs and rats of “The Last Enemy” who resemble the animalistic characters of Kamandi, and a flying chair that would get an upgrade to seat Metron of the New Gods. Enjoy!

Issues #1-3 are now collected in a Kindle version!

Last September, we ran a series of educational pieces from Mystery in Space. After we collected Giants of the Telescope, Our Amazing Universe, and Our Strange Universe, we had a batch of astronomy pages left that didn’t fall under any of those headings.

They’re still cool, though, so we present to you the remaining astronomy features today. Enjoy! 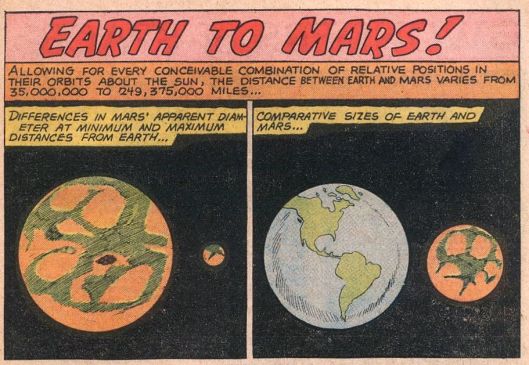 We discovered Captain Science in a Caliber Press reprint called Buried Treasure. They created a fine black and white re-print of “Captain Science and the Insidious Dr. Khartoum!” Love the Wally Wood artwork!

Like many Golden Age Comics now in the public domain, you can find Captain Science scans at the Digital Comic Museum. Or, you can collect the original issues of Captain Science. 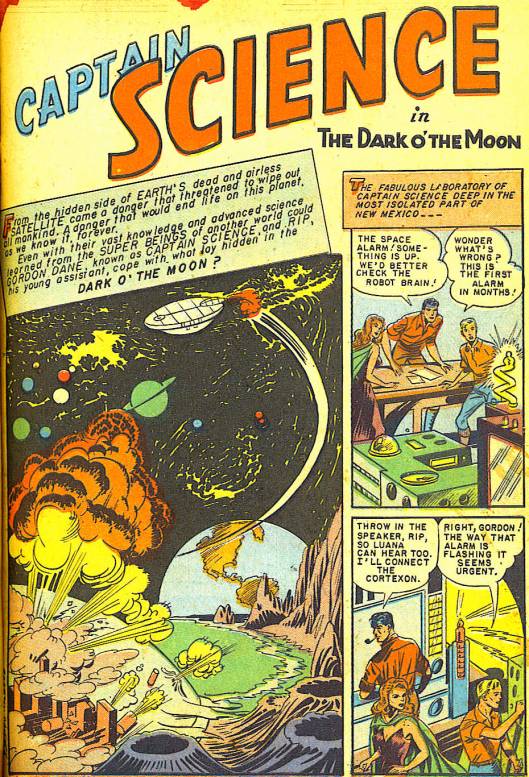 Al Williamson, Beware the Robots, golden age, Martian, One of Us is a Martian, robot, Steve Ditko, Tales of Suspense

One of us is a Martian. It might be …you! Come to think of it, we’re all Martians, here! So, let’s rock this Steve Ditko tale from the golden age of science fiction comics and see what happens.

We’re also including an Al Williamson piece called Beware of the … Robots! Yes, the next time someone complains about machines taking their job, you can confidently say, “Let ’em!” We’ve got better things to do!

Thanks to The Warrior’s Comic Book Den for hipping us to this sci-fi classic. They’ve got some great Al Williamson pieces there and much more. 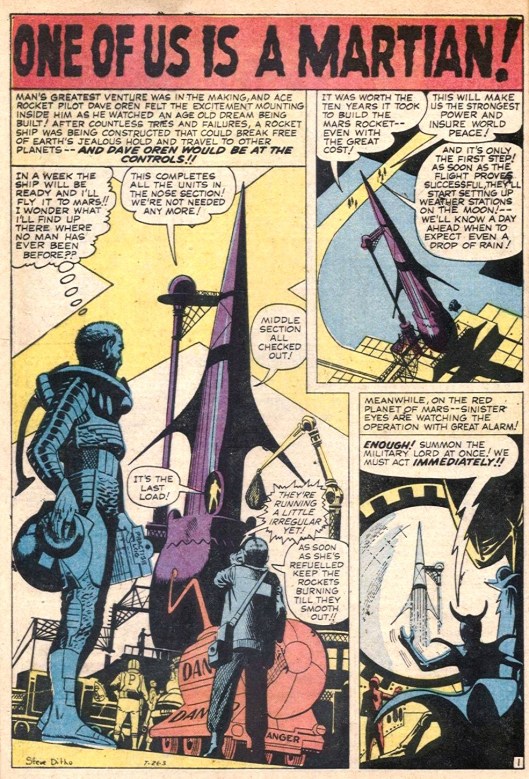 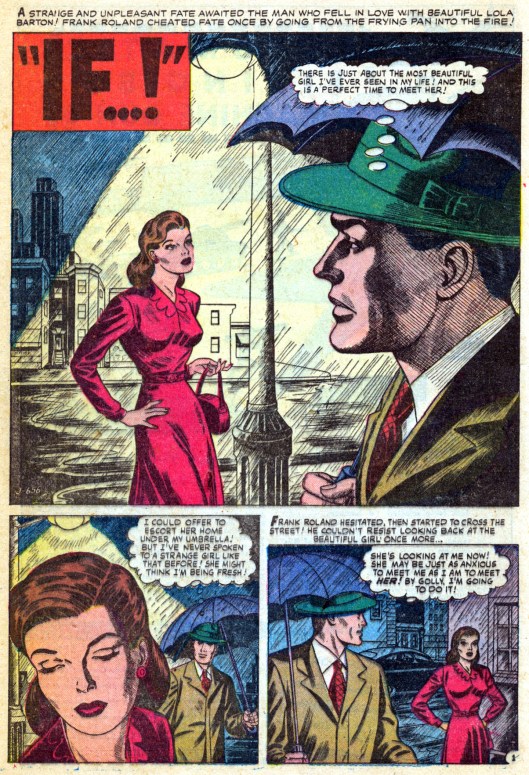 In this short story from World of Fantasy, a man hesitates to start up conversation with a lovely lady standing in the rain one night. But, the reader gets a glimpse of the strange events that would unfold if the man had actually worked up the nerve to talk to her. We don’t want to spoil it for you, but it involves aliens!

We haven’t had any luck tracking down a reprint collection of these. If you know of one, leave a comment for us! 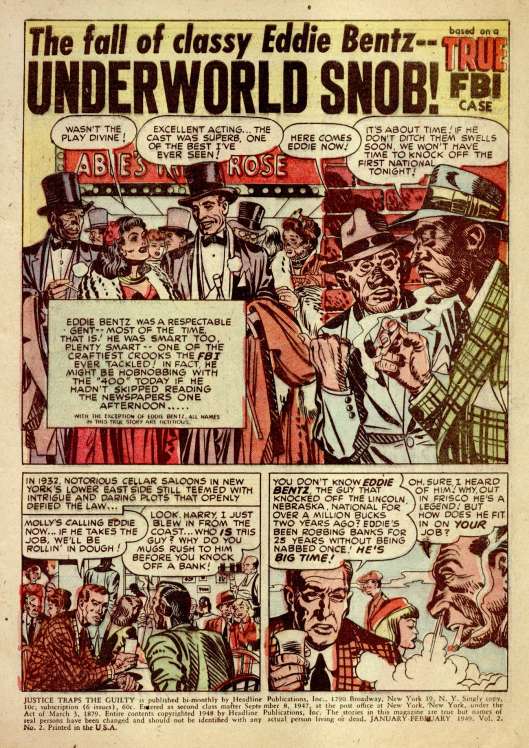 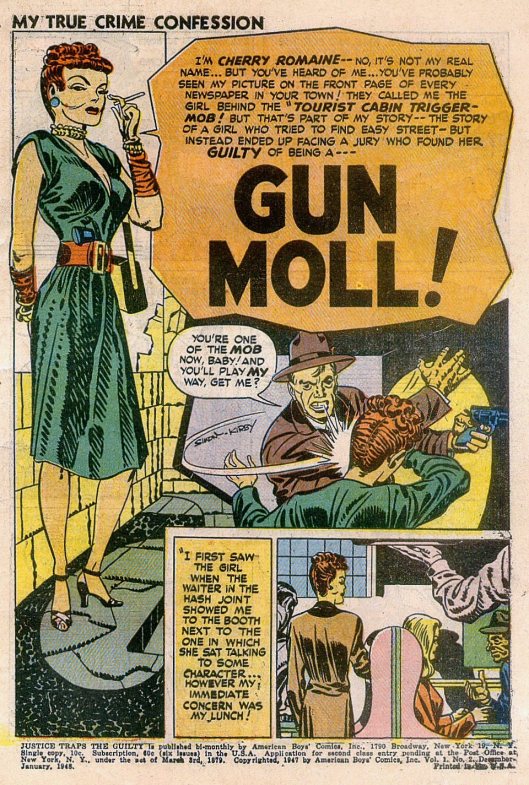 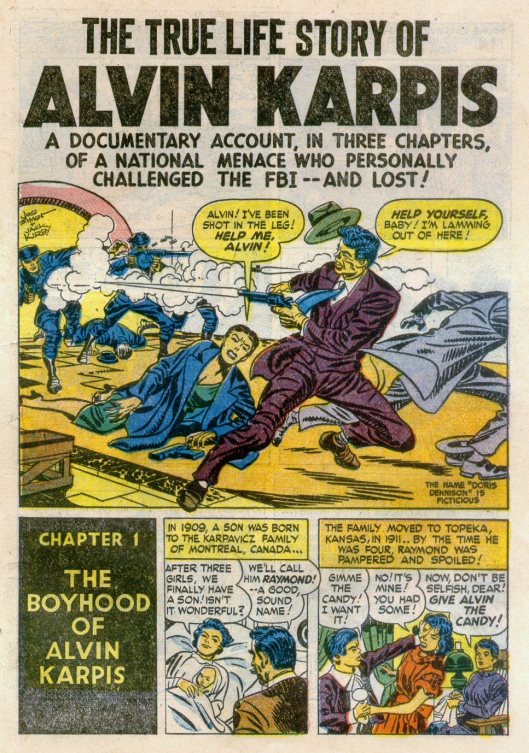 As part of their Classics Illustrated series, Gilberton published Prehistoric World in 1962.

It takes the reader from the beginning of life, through the age of dinosaurs, into the age of mammals, and ends with a detailed look at prehistoric man. Within its 100 pages, we also learn about many key people who shaped the study of prehistoric life.

Collector’s Guide:
– From Classics Illustrated Special #167: Prehistoric World; 1962.
– Not in stock? Try it on Newkadia. 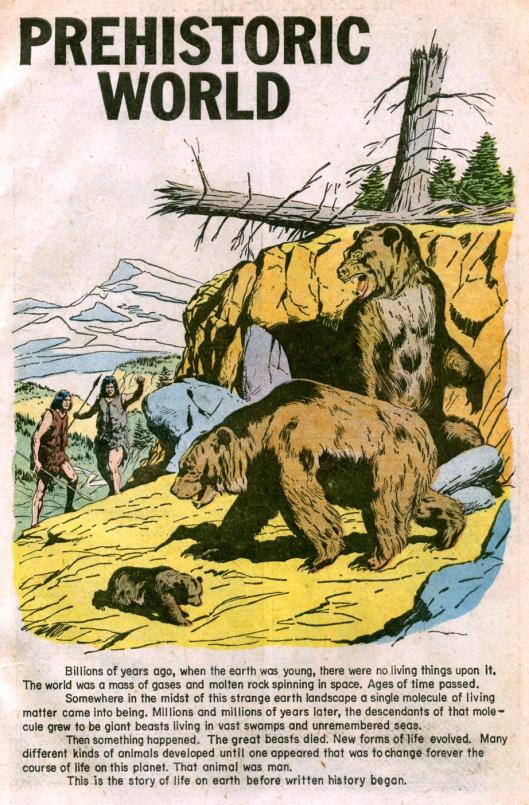 Joe Simon and Jack Kirby’s work on Police Trap has been well-documented at The Jack Kirby Museum. The collaborators watched their publisher fall to pieces, and they found Charlton was willing to help continue the title. Police Trap #5 was the first Charlton issue, but it would only last through #6. 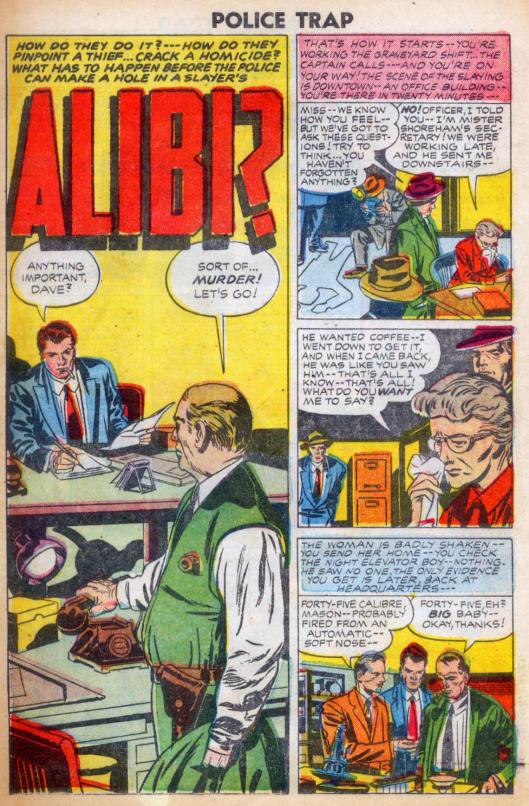 Challenge of the Unknown, golden age, High Priestess of the Snake People

What sold us was the hallway full of severed reptile arms holding torches. Now that’s decorating! We hope you enjoy “High Priestess of the Snake People” from Challenge of the Unknown. It’s just your usual boy-meets-girl, girl tries to transform boy into hideous reptile demon like the rest of her cult – type story. Rock! 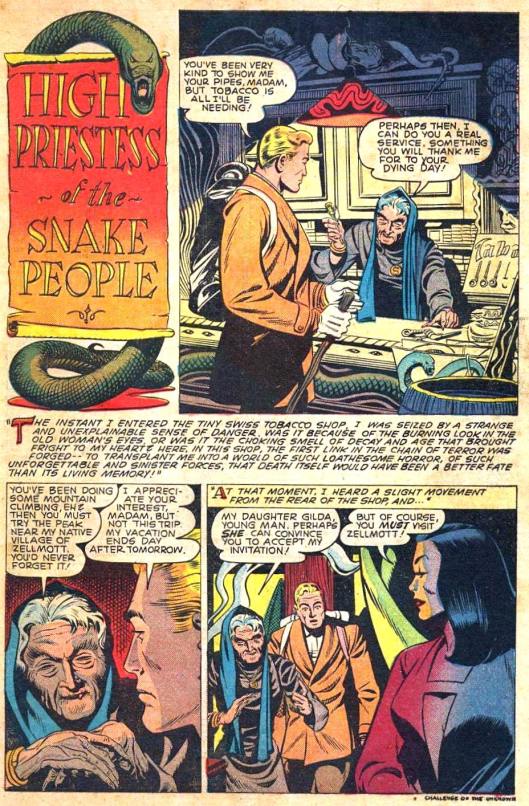 Greetings from the land of dreams, Martians! Instead of sharing these awesome full-color Little Nemo in Slumberland strips one-by-one, we’re going to lay all of 1909 on you in one post.

That’s right: 1909. Dude, that was a long time ago. Before women had voting rights in the USA. Before men walked on the moon. Heck, people hadn’t even adjusted to having cars, planes, and radios! But the imagination of artist Winsor McCay brought many people all the flights and trips they needed.

Little Nemo has been collected a few times. I like the “So Many Splendid Sundays” Vol. 1 & 2 because they are printed on large pages like the originals. But if you are looking for a complete collection, you want either the six-volume set published by Fantagraphics, or the 2-volume hardcover collections by Checker.

Would you like to dream some more with Little Nemo? Just click Little Nemo in Slumberland Gallery to see all of our exhibits. We also like Golden Age Comics and Dinosaur Comics.