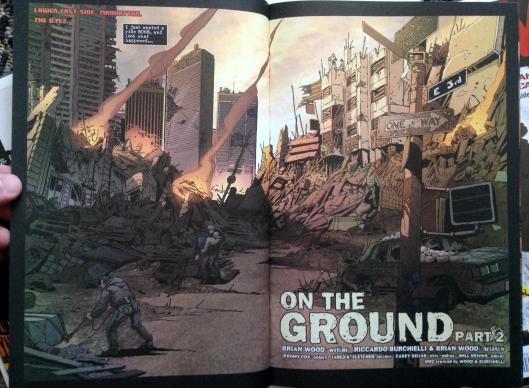 Someone left a copy of DMZ #2 on the top secret fifty cent rack a few years ago. They inadvertently introduced us to a series we would now include in our Top Ten Favorite Comic Book Series. DMZ tells the story of young journalist Matty Roth’s increasingly tragic involvement in the next civil war on U.S. soil. Most of the story takes place in a war-torn New York city, a nominally demilitarized zone (DMZ) between the secessionist forces and the U.S. government’s forces – military, mercenary, and otherwise.

The 75-issue series breaks up into short stories lasting five issues with several shorter character studies interspersed between the main arcs. You can buy it as DMZ single issues, which other than a few early issues is not much more expensive than if you had purchased them new, or a series of trade paperbacks. Vertigo is, at the time of this post, three books into a deluxe hardcover edition which collects about 12 issues per volume. I had the single issues, which you can see in this post’s somewhat random photos.