My Venus flytrap is a year old now, and it’s been a wonderfully green, insect-killing addition to the office. But I almost let it die.

Back in February, I posted the picture below. It shows a stalk growing among the various fly-eating leaves. I didn’t know flytraps made stalks, so I left it alone to see what would happen. I might as well have signed the poor thing’s death warrant.

That stalk is meant to become a flower. Fortunately for my flytrap, that never happened. The stalk only turned black and shriveled up like the leaves do on a regular basis. I say “fortunately” because when a second stalk sprouted a few months ago, I did the research I should have done in the first place. It turns out that when a Venus flytrap makes a stalk that flowers, it really puts its murderous little heart and soul into it. Once the flower blooms, the plant has done its job and gives up on life. It dies.

As soon as I read that, I cut off the new stalk and, per the article, placed it into the sphagnum moss beside the rest of the plant to give it a chance to sprout and flower on its own. It didn’t. But hopefully I cut the cord in time to keep my plant growing. It’s hard to say, as this wintry time of year is a dormant phase for flytraps.

Is there a lesson to be learned from this? Maybe it’s “Do your bloody research.” On the other hand, how dare I interfere with my plant’s attempt to create its ultimate biological masterpiece: a beautiful flower that is the apex of its existence and its entire reason for living? Why should my goals for the plant be more important than the plant’s goals for itself? Shouldn’t I just let it do what it wants?

After pondering this problem in relation to mammals I have known and loved, be they human or feline, I realized I am projecting my personal problems onto my flytrap, and that the solution isn’t mammalian in nature. What would actually make my little plant happy is not pointlessly dying, nor my trying to rescue it from itself. What it really wants is a mate: another plant, with another flower, with whom it can share pollen and create new flytrap seeds together, and spawn a whole new insect-killing generation.

So, besides “do your bloody research”, the other lesson here is: Even flytraps need a friend. 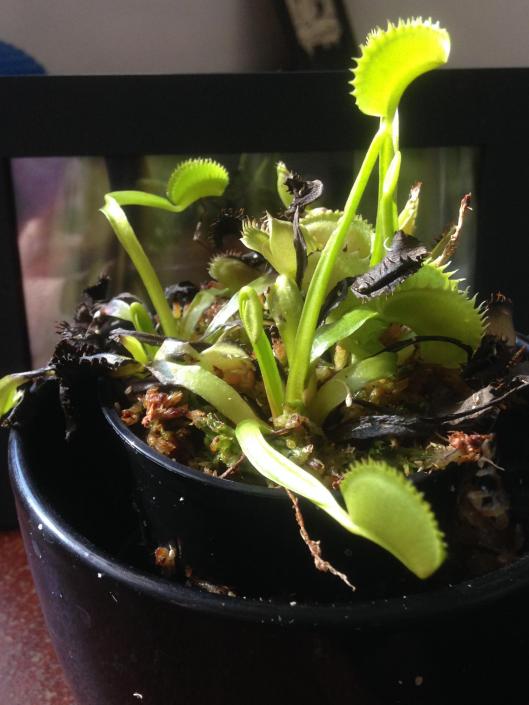 Making art quickly makes chaos out of your walls. Things get hung at random and, over the course of a year, lose all sense of order. Closing out 2015 required a bit of wall patching, cleaning, painting, and re-hanging.

Yesterday saw the arrival of the proof copy of a music album I’ll be publishing this month. The CD looks and sounds great, but I found the volume to be too low compared to most of today’s music. I plan to return to my master files, crank the volume a bit, and resubmit the audio before making an official release. The artwork, which I designed using scans of an acrylic painting and an ink drawing, came out really nice. I’m excited to get this album and one more music album published before the new semester begins.

I don’t do the tree thing in December, but the art studio desperately needed some suitable greenery. Here in the desert, we get ordinary house flies all year long, even in the winter. Otherwise the weather is so nice you can open windows and doors and let the cat come and go as she pleases and enjoy the sunlight and play guitar on the porch and… then the flies. It doesn’t take but a couple in the house to drive me mad. But, when life gives you flies, grow Venus flytraps.

Nothing says seasonal festivity like a carnivorous plant. I ordered this one on eBay from “Joe’s Carnivorous Plants”. She just ate her first fly yesterday. I was so proud. The leaves are thin enough that when the sun shines on them you can see the pesky little fly trapped in there.

That should keep the freshly cleaned and organized sketch room from devolving into pestilence and infestation for another year! Go, little flytrap!