This post is part of a series about what was inside this month’s big box of free comics.

The Return to New York story in the original TMNT series #19–21 is even better than I remember. I think I was in turtle overload when I read it years ago, and I’d forgotten much of it. Visually, it’s one of the greatest TMNT stories of all time, with stunningly detailed artwork, creative layouts, extensively choreographed fight scenes, and incredible double-splash pages.

The black & white artwork creatively uses both black and white ink in addition to detailed screentone shading (sometimes called by the brand name Zip-A-Tone). The result is some of my favorite artwork in any TMNT story, and it’s a joy to watch the Turtles hack and slash their way through sewers full of enemies while their new Triceraton friend destroys everything in sight with his blaster.

But I was in for a shock when I read issue #6. It wasn’t just the wraparound cover that’s even more awesome than I remember. It wasn’t just the visual splendor of Turtles and Triceratons in combat. No, the shock was the discovery of just how many ideas I apparently stole from this single issue for my fiction series, The Adventures of Meteor Mags and Patches.

Issue #6 has asteroids, dinosaur-type aliens in a combat ring fighting to the death, a ruling body referred to only as the High Council, silly satire, aliens who dislike mammals (“Shut your face, you puny piece of mammal droppings!”), heroes who insult the dino-aliens (“Where I come from, bozos like you know their place—in museums, displayed as skeletons of long-dead ancient freaks!”), fight scenes that last for several pages with scant dialogue, and a shoot-out while attempting to board a spaceship. Somehow, this mid-1980s masterpiece burrowed so deeply into my brain that I was unconsciously drawing on it for inspiration decades later.

I wasn’t planning on picking up the original ten issues of the series, but after reading #6, I want to read the whole storyline again! 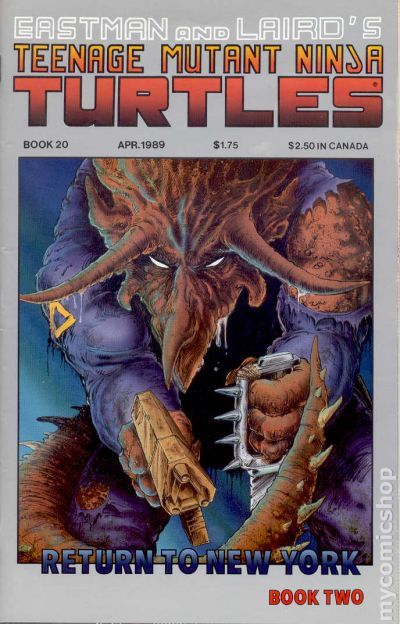 Okay, this was a cool idea: reprinting the original pencil art and layouts for the fiftieth issue of Teenage Mutant Ninja Turtles. IDW has been printing over-sized “artists” version for a few years, volumes which feature original unfinished artwork.

But I have to admit I would have preferred seeing the published art at this impressive size. The book rivals the old Marvel Treasury Editions in size, but it sort of feels like an “extras” DVD that came without the original movie. I sold it to a TMNT collector who could truly appreciate it. Here are some photos so you can peak inside. 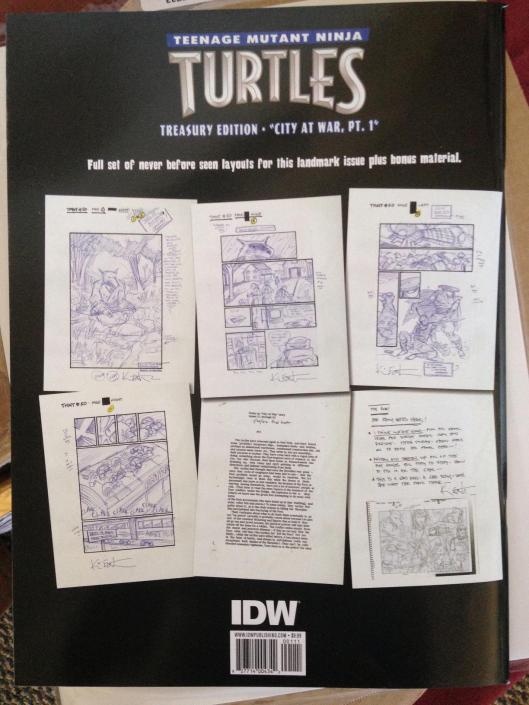 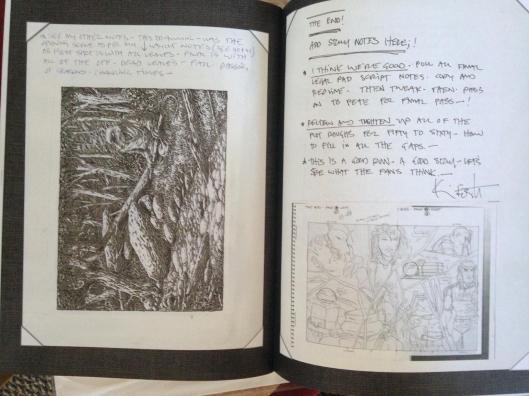 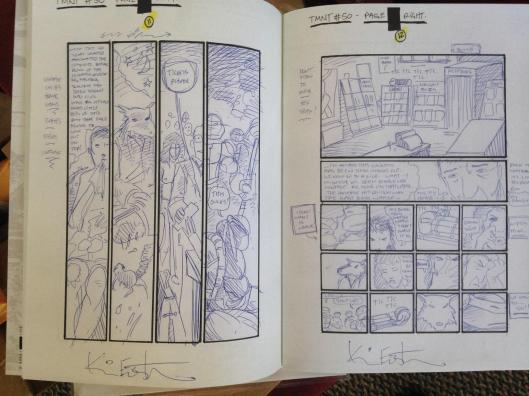 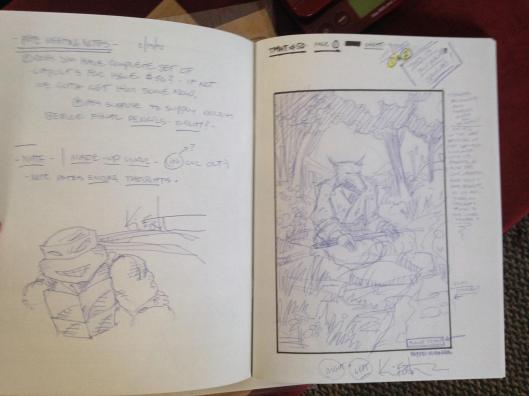 I never saw the originals, so I picked this up to see what that series was like. I wasn’t super hyped about it, but it does have some cool Jim Lawson artwork, as you can see in these photos I took before selling it. 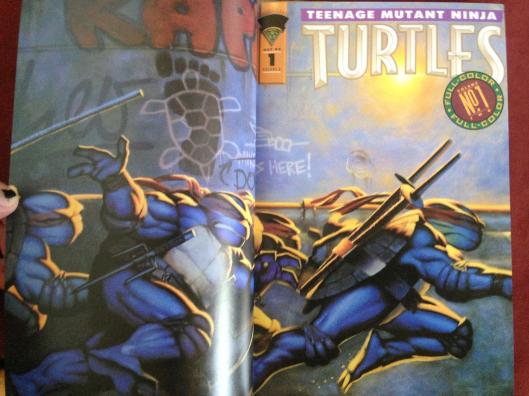 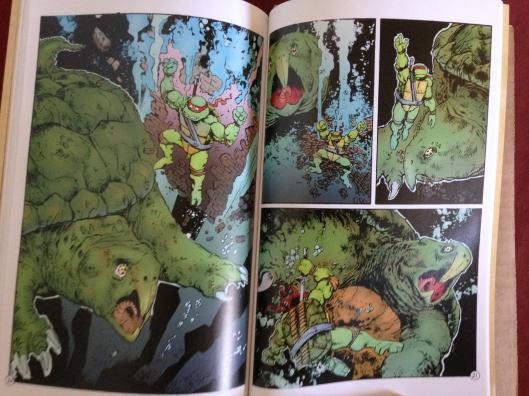 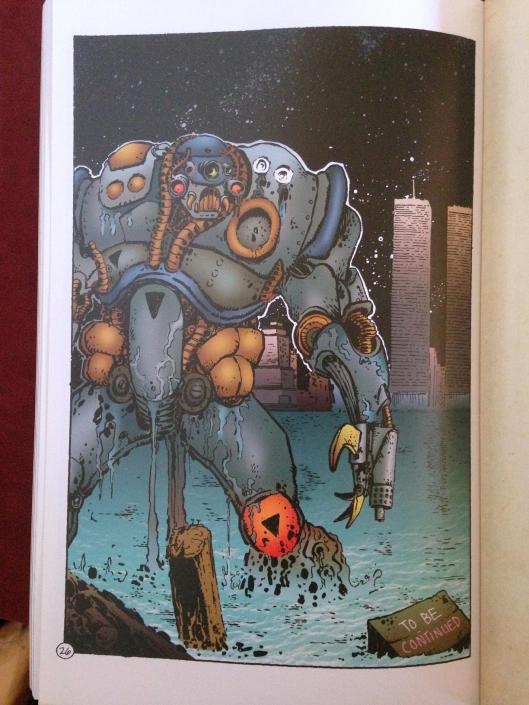 IDW has lately been reprinting the earliest and original Teenage Mutant Ninja Turtles comics from the 1980s. Back in the 80s, prices of first prints of the original comics skyrocketed, and they still retain a fairly high collector’s value. In response to their limited availability to all but the wealthiest collectors, First Publishing produced four full-color oversized graphic novels from the original black and white stories.

The unique and gritty visual style of Eastman and Laird’s reptilian martial artists comes through even in color. First did a wonderfully professional job on this production. They wisely included the Leonardo one-shot, since its story leads right up to the events of issue #10. And, First thoughtfully preserved the dramatic three-page fold out from issue #10. We have scans of the original black and white pages in our archives for comparison.

But all of the splash pages look great, and the binding and paper quality of these turtle tomes remains evident decades later. From the first issue to the battle with Triceratons in space to the hilarious Cerebus crossover, all of the Turtles earliest adventures rock hard in this graphic novel format.

Let us offer a few suggestions for those seeking some high-quality Turtles reprints. You can still find copies of the Teenage Mutant Ninja Turtles TPB by First in stock at reasonable prices ($10-$15 for a Fine copy,) though you may need to go to eBay to get a complete set all at once! IDW printed the stories in single issues in full color as Teenage Mutant Ninja Turtles Color Classics, but it seems they left out the Leonardo one-shot to include issue #11 which more or less wraps up Eastman & Laird’s original plot line. 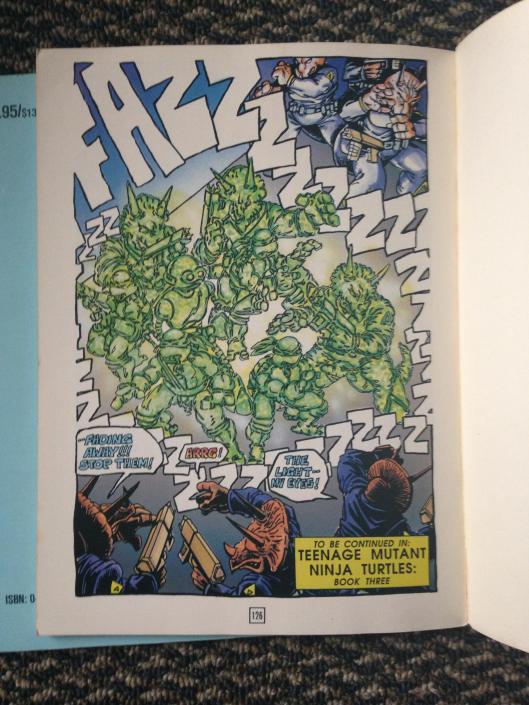 A second volume of color classics reprints some excellent adventures from the subsequent stories, including a reprint of the glorious Return to New York storyline this spring. Those who want these stories in black and white should get the excellent seven-volume Teenage Mutant Ninja Turtles Collected Book produced by Mirage in the 1990s. IDW more recently gave us The Ultimate Collection in hardcover which wisely includes the one-shots from the 80s as well as the original title. 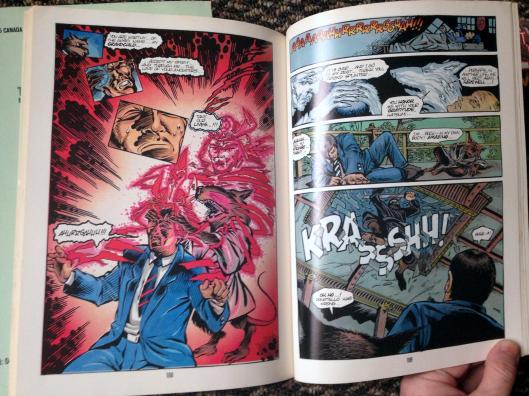 Despite the availability of recent reprints, the old ones have managed to hold onto their collector’s value due to their limited runs and high production values. The First Publishing collection also gives you a much larger page size than, say, Mirage’s normal-zized Collected Book reprints.

Clearly IDW has much to gain by reprinting these collectible issues, but they also do readers a great service by keeping these classics in print. We sold both the First TPB set and the Collected Book set on eBay last year, but you can bet we would like another copy of Return to New York in our hands before all this is over!

With its wraparound cover and multi-page foldout of a dramatic scene, Teenage Mutant Ninja Turtles #10 anticipated the 1990s by half a decade. It presages covers like 1991’s X-Men #1, and the dramatic foldouts by Jim Lee for Image’s WidC.A.T.s. We see these in more modern comics, too: Jim Lee’s huge foldout in All Star Batman and Robin, Bryan Hitch’s massive battle tableau for Ultimates 2, and the wraparound covers produced for Avatar.

This particlular TMNT issue may well be our favorite. Eastman and Laird had refined and perfected the visual style they roughly began in the first issue. Their mixture of silly and serious achieved a perfect blend they would maintain through the Return to New York storyline. Soon, Jim Lawson, Rick Veitch, Michael Zulli, Steve Bissette, and many more independent artists would all do incredible things with these unlikely characters. Here, however, the Turtles’ creators enjoy one of their finest collaborative moments.

The issue includes an ad for Tales of the TMNT, which would feature the work of Jim Lawson. Lawson became the Turtles’ longest-running artist. 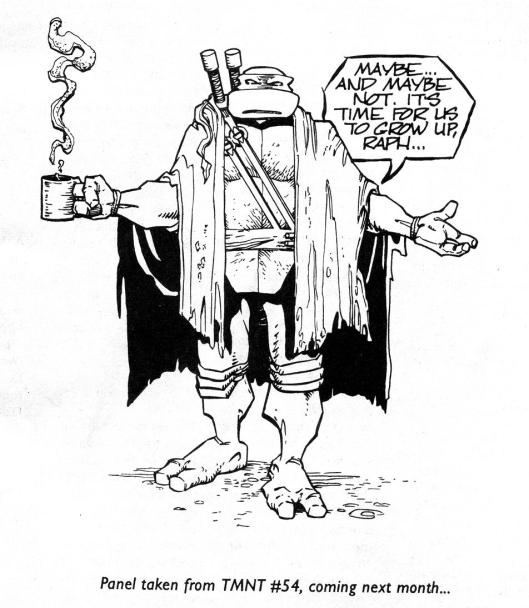 Yeah, right. Let’s just go kick some ninja butt like we used to.

Here is a guest appearance of one of the Teenage Mutant Ninja Turtles in an issue of Pre-Teen Dirty Gene Kung Fu Kangaroos! Did you get all that? And to top it off, a guest (parody) appearance of the Man-Thing in Adolescent Radioactive BlackBelt Hamsters. That’s a lot of freakin’ mutants. Have fun!