His name is Thanos. And when the nasty Chitauri alien warns him that to mess with the Earthlings “is to court death,” Thanos fans know exactly why that brings a sinister smile to Thanos’ face.

Why? Because Thanos is all about courting Death. We don’t mean living dangerously and playing extreme sports. Thanos loves Death. He wants to marry her. You can see why he might smile about courting her…

We offer you a guide to the most important comic book appearances of Thanos. Our links take you to anything you’d like to purchase. Are you ready for a Titanic Tour of Thanos Thrills? Then let’s rock this thing!

THE BEGINNINGS OF A TITAN

Artist extraordinaire Jim Starlin created Thanos. If you pay attention to the movie credits, you’ll see Starlin gets a mention with other comic book greats. Rather than tracking down all the individual issues, get the orginal Thanos epic collected in The Life of Captain Marvel TPB, orignally printed as single issues. It collects the first and arguably most important early Thanos story. You can also find a deluxe edition printed as Marvel Masterworks Captain Marvel #3. Thanos also appears in The Death of Captain Marvel, so you may opt to just get it all in one shot as The Life and Death of Captain Marvel!

The other early must-read Thanos – which also guest-stars the Avengers in the final showdown – was collected in Warlock Special Edition. Thanos became so popular that Marvel had to reprint the collection! Believe us, it’s a lot easier to buy the Special Edition than track down all the original issues. You’ll also find a deluxe printing of the Thanos parts in Marvel Masterworks Warlock Vol. 2. As we’ve stated in our prieview of Warlock, it’s one of our favorite Bronze Age stories and we can’t recommend it enough.

When Jim Starlin took over Silver Surfer with artist Ron Lim in 1990, the first thing he did was resurrect Thanos in Silver Surfer Vol. 2, #34-52. Jim went on to bring in all his supporting cast from the earlier Captain Marvel and Warlock sagas. You can find the core story collected as The Rebirth of Thanos which includes the supplementary Thanos Quest.

Next, Starlin takes Thanos on three epic missions to destroy the entire universe. He still thinks this will make Death happy! This chapter of Thanos’ life begins with Infinity Gauntlet (also in single issues.) The sequel is Infinity War. The madness continues unabated in Infinity Crusade. But, things don’t go well for Thanos. Once he becomes god (again), he becomes disillusioned with his quest to win Death’s love.

Afterwards, Thanos regrets always trying to kill everything and everyone everywhere. So, he sets out to do some good deeds. Crazy, we know – but Starlin writes a good story in the short-lived Thanos series, collected in rare (and expensive) TPBs as Thanos: Epiphany and Samaritan. (Keith Giffen takes over from Starlin for the Samaritan story in 7-12.) We have a preview of a trippy confrontation between Thanos and Galactus from this era.

Eventually, Jim Starlin’s “nice guy” Thanos gets embroiled in another heinous plot involving the destruction of the universe. Although he’s on the good side, Thanos ends up destroying the dang universe in Marvel Universe: The End! (Also in single issues.) We enjoyed this one more than the other Infinity books. For one, the superheroes don’t do a damn thing but get wiped out – and we always figured that’s what really should have happened. Second, Thanos is more than a threat or a co-star. This is really his book. 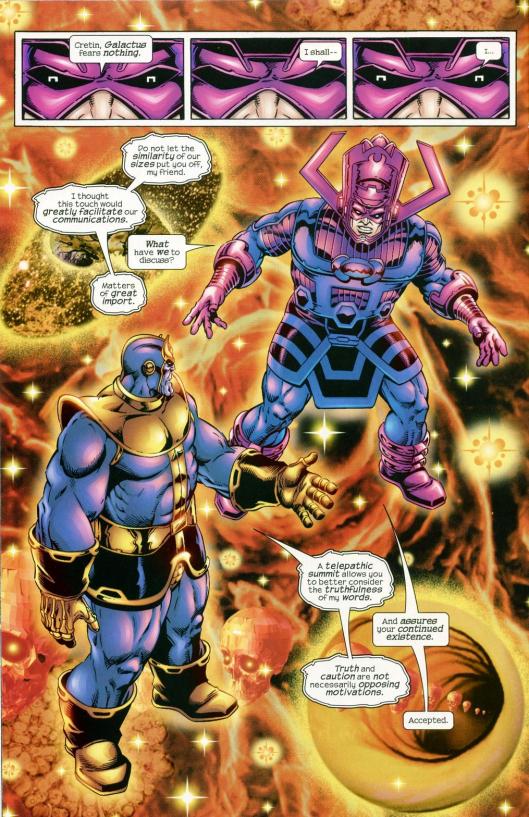 With Annihilation, Marvel re-charged all their Bronze Age “cosmic” characters for a new generation. Fans loved it, and Thanos made a return from the oblivion of The End to wrap up the action. Annihilation forms such a star-spanning saga that collecting it can be a part-time job. This handy infographic will help you! You will find dozens of Annihilation paperbacks.

Last but not least, Thanos appears in two intergalactic tales of the “Ultimate” version of Fantastic Four. They are collected in the affordable trades Ultimate Fantastic Four TPB #7 and TPB #10. Although Jim Starlin is a huge favorite of ours, these two totally intense non-Starlin Thanos stories deserve a place in the collection of any Thanos fan.

BUT WHAT ABOUT THE TESSERACT?

In many of these stories – Captain Marvel, Warlock, and Ultimate Fantastic Four – Thanos obsesses with the Cosmic Cube. The Avengers movie calls it the Tesseract. You may be interested in knowing a little more about the comics history of this device.

The Cosmic Cube originally gave Captain America a hard time as a weapon of the Red Skull in Tales of Suspense #79. The story runs two more issues in T.O.S. #80 and #81. In fact, Captain America #186 details how the Red Skull created Cap’s buddy The Falcon with the Cosmic Cube even though The Falcon had been starring with Cap for quite some time by then.

Thanos Being Huge and Evil by George Tuska

As a postscript, we’d like to direct you to previews of complete Thanos stories on the king of 1970s comics blogs: Diversions of the Groovy Kind. If you dig around in Groove’s archives, you’ll find plenty more Warlock and Captain Marvel stories from the Bronze Age.
The Death of Thanos
The Final Flower