If you ever wondered where Spider-man’s black costume first appeared, you’ve come to the right place! Here is the historic page from the mind of Jim Shooter and the drawing board of Mike Zeck in Marvel Super Heroes Secret Wars #8. (It was reprinted in the Secret Wars TPB.)

This is all there is to it: a little black ball pops out of a machine on some other planet. No one knew until later it was a hideous alien symbiote! Sucking on Spidey’s will to live! Trying to take him over! Eventually, separated from Spider-man, the alien symbiote would bond with Eddie Brock to become Venom.

Although this was the first appearance of the black suit in Spidey’s life, it was not the first time it saw print.

Secret Wars #8 has a publication date of December, 1984. Earlier, in May, 1984, the black suit appeared in The Amazing Spider-Man #252, The Spectacular Spider-Man #90, and Marvel Team-Up #141.  Marvel Age #12 (March, 1984) came out a full two months before ASM #252 and featured sketches of Spidey’s new black costume. Despite their historical significance, all but ASM #252 can be had in a satisfying Fine or Very Fine condition for about the price of a new book these days.

It is also worth noting that Spidey wasn’t even the first to wear it. Julia Carpenter, the second Spider-Woman, wore the black suit first in Secret Wars #6 and #7. This explains Spidey’s comment about “maybe” being “subconsciously influenced by that new Spider-Woman’s suit”.

Since this post first saw the light of symbiotic day, several people have expanded the research in our comment sections. Transformers #3 (of a 4-issue limited series) has a publication date of January, 1985, so it must have been on the shelves in late 1984 near the same time as Secret Wars #8. An IDW Transformers reprint book discusses the legal reasons behind Spidey’s appearance in the black suit in this issue.

According to reader Lpaul, Amazing Heroes #39 (January, 1984) shows a black-suited Spider-Man in a  preview which predates all the above books.

Reader Brandon DeSantis kindly provided us with images of three earlier appearances, along with their dates. First, in Heroes Hotline from December, 1983, we see the front and back of a black-suited Spidey. The Secret Wars series was called by another name: The Cosmic Champions. 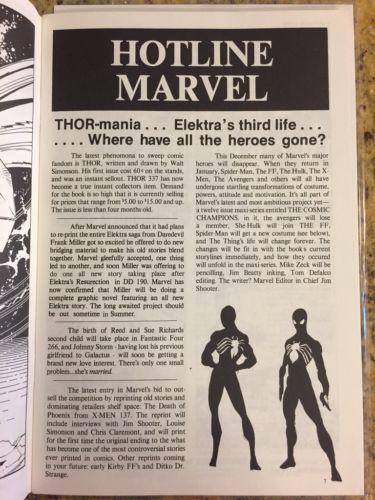 Second, and also hailing from December, 1983, is The Comic Reader #215. Here is the cover followed by the preview of the costume.

But we can go even earlier! In Amazing Heroes #35 (November, 1983), we see the back of a black-suited Spider-man in a newsflash about Secret Wars by another name: The Secret War. Notice that the text refers to the suit as being black and red, although the issue is printed in black and white. The image looks exactly like the image shown in Heroes Hotline.

Reader Steven Farshid contacted us to say we can go even earlier! He sent images from Comics Journal #85, dated October 1983. A Newswatch article on page 13 bears the headline “All Major Marvel Characters to Engage in Year-Long ‘Secret War’ in 1984”, and continues on page 14 with an illustration of the black suit. 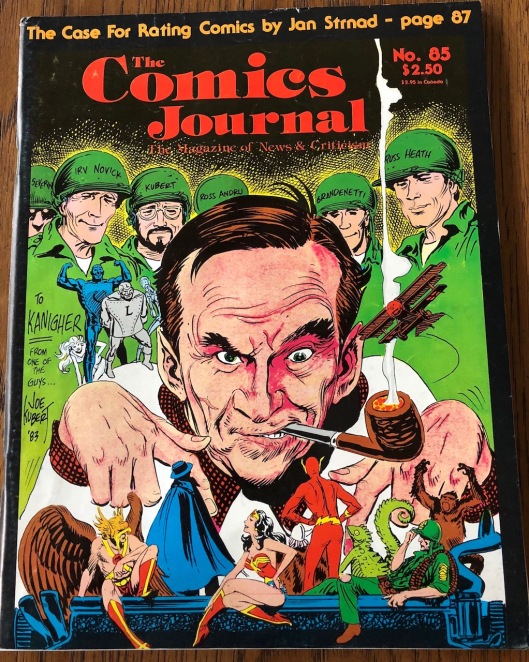 What’s that you say? You want to see the black suit concept art from when the white parts were intended to be red? Reader Brandon DeSantis has you covered yet again, with these two scans from Marvel Age #12.

The artwork is from Rick Leonardi, based on ideas submitted in a story by spider-fan Randy Schueller. Below is the letter from Editor-in-Chief Jim Shooter offering to buy the story. For the full details, check out Randy’s 2007 statement about his original story idea for the black suit.

Dr. Doom. He’s always been one of our favorites. Too bad his arrogance always trips him up. If only he could admit when he makes a mistake, he might be a hero. The guy is so intense he took on God – and won!

Collector’s Guide:
Look for the original Secret Wars issues, the collected Secret Wars TPB, or even a whole line of action figures and figures packaged with reprints. Until then enjoy this two-part tribute to Dr. Doom vs. The Beyonder! 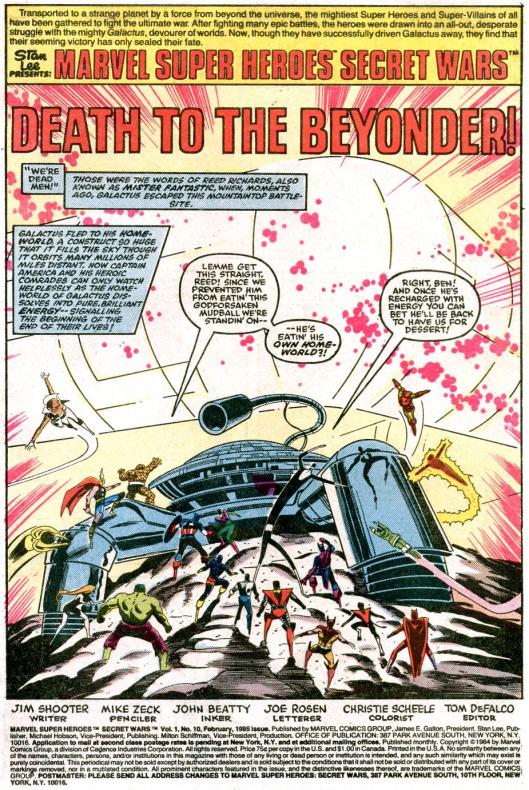 Dr. Doom. He’s always been one of our favorites. Too bad his arrogance always trips him up. If only he could admit when he makes a mistake, he might be a hero. The guy is so intense he took on God – and won!

Collector’s Guide:
Look for the original Secret Wars issues, the collected Secret Wars TPB, or even a whole line of 25th Anniversary action figures and figures packaged with reprints. Until then, enjoy this two-part tribute to Dr. Doom vs. The Beyonder!