John Romita’s run on Amazing Spider-man brought a whole new energy to a book once defined by Steve Ditko’s unique illustration style. Peter Parker remains beset by all sorts of problems, but being treated like a wimp is no longer one of them. He has both Mary Jane Watson and Gwen Stacy competing for his attentions, and he doesn’t mind telling his rival Flash Thompson to go take a flying leap. But between his aunt’s failing health and a slew of supervillains that beat him down repeatedly, Spider-man exemplifies the underdog appeal of many Marvel from the 1960s. Though these books cost quite a bit of money, many Marvel Tales reprints from the early 1970s cost substantially less. 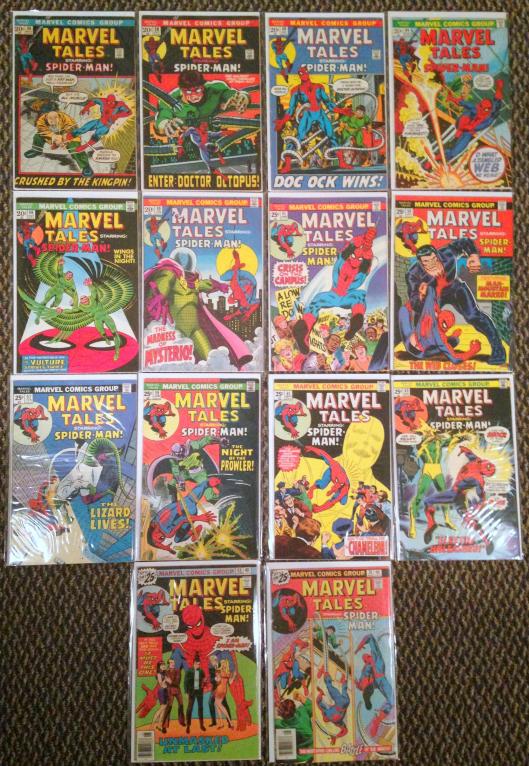 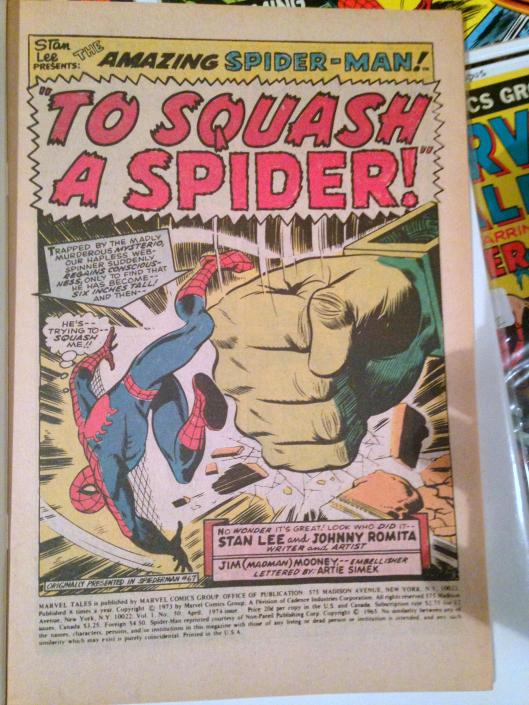 Along the way, Stan Lee adopts a groovy-man-groovy tone to some of his dialogue, and even places Spidey on campus for a student protest. While it might seem dated to some readers, it shows Lee’s constant aspiration to make his heroes more relevant and relatable to his audience. It blends well with his tendency to address readers directly and the melodramatic voices of the villains, giving these stories a unique voice. 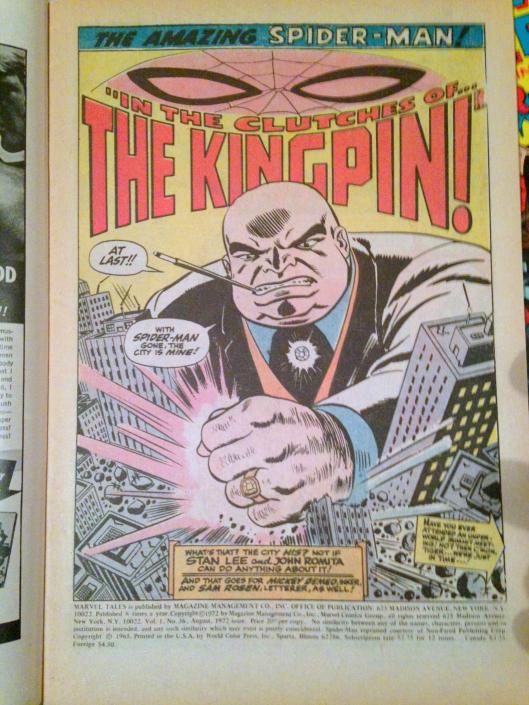 While Peter enjoys unprecedented romantic success, Lee takes an issue to hand Spidey a lesson in humility from a strong woman: Medusa of the Inhumans. Despite the hand-to-hand combat (or hand-to-hair, in this case) Lee keeps a comedic tone about greed, advertising, and misunderstandings. 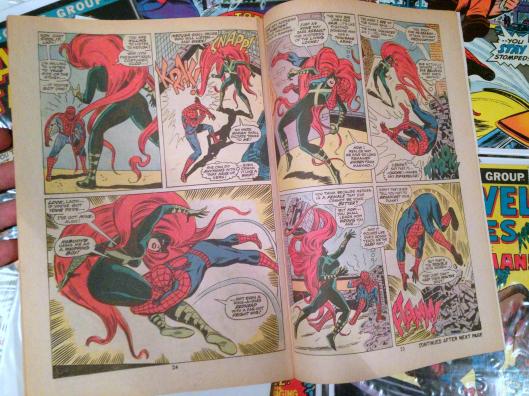 But things turn more grim near the end of Romita’s tenure, where a fatal confrontation with Dr. Octopus sets the tone for the subsequent tragedy-ridden days of Gerry Conway and Gil Kane’s run. 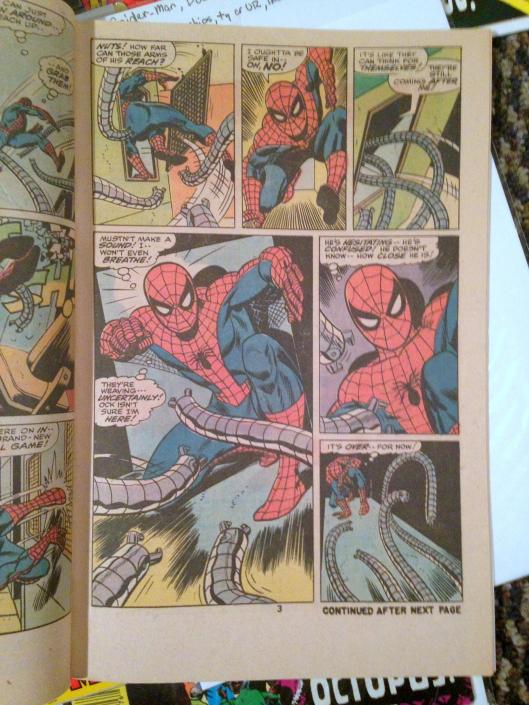 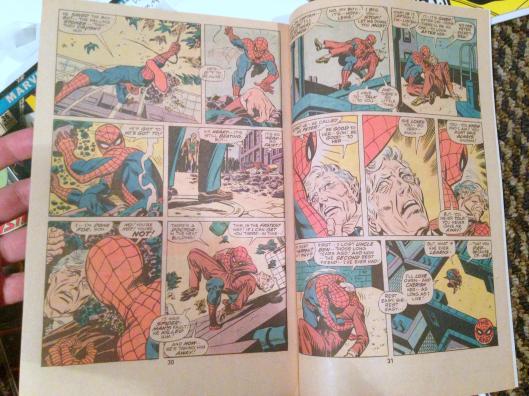 Still, the majority of the run dishes out personal tragedy, epic struggles, heroic triumphs, and comedic banter in equal parts for our hero. Artists John Buscema and Jim Mooney, among others, fill in a few issues but maintain Romita’s overall tone and style.

Let’s see some more of the interior artwork, below! 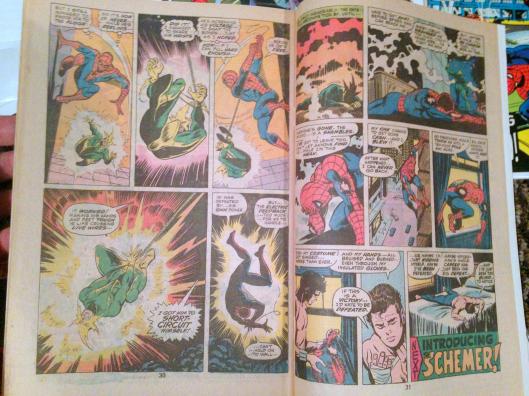 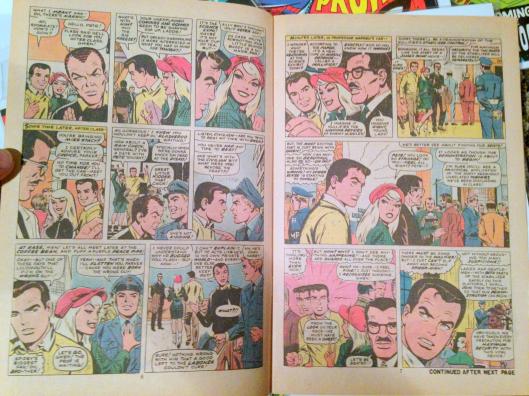 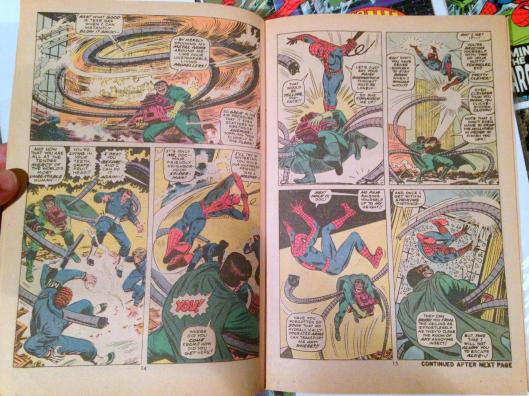 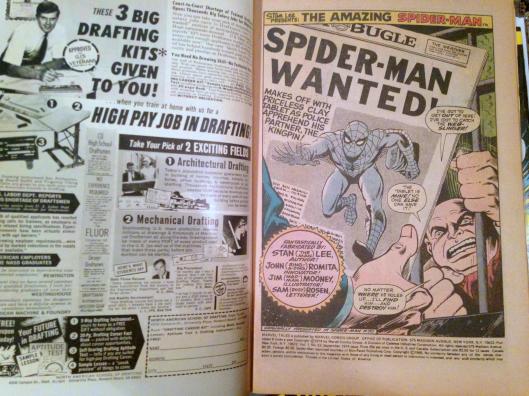 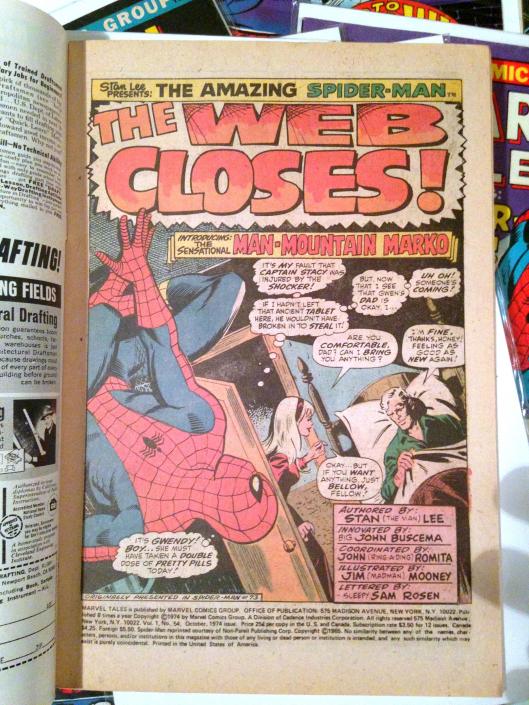 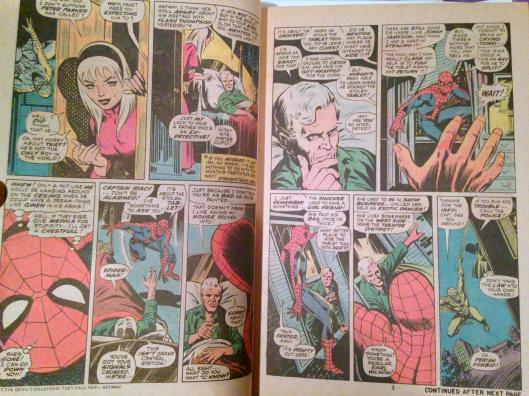 Being a super-villain must be awesome. You never have an existential crisis. Every day when you wake up, you know exactly what you want most in life. One purpose. One plan. One desire that will never die… 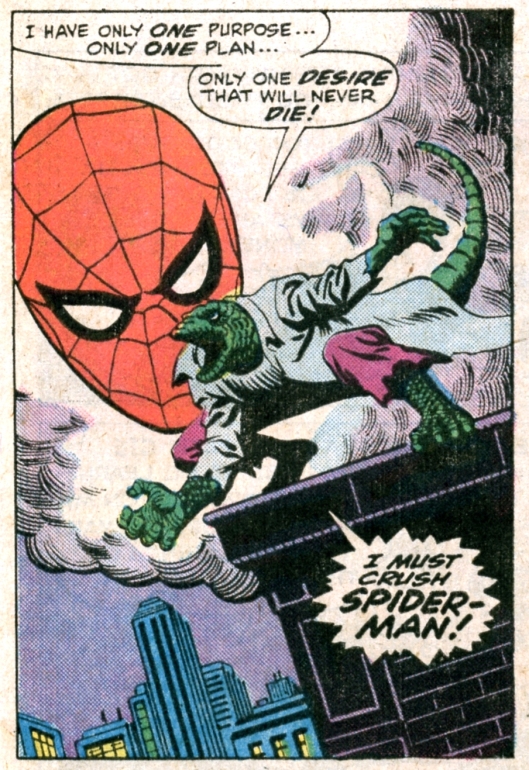 Stan Lee and John Romita spun one of our favorite Lizard stories in this two-part epic from 1967. The Lizard totally freaks out (as usual) and knocks Spider-man off the side of a building. Spidey in a splint?! Oh no! But getting a little banged-up doesn’t keep Spidey from a spectacular showdown with The Lizard at a railway station. Guess what’s on the train… Thousands of hideous reptiles! YES! 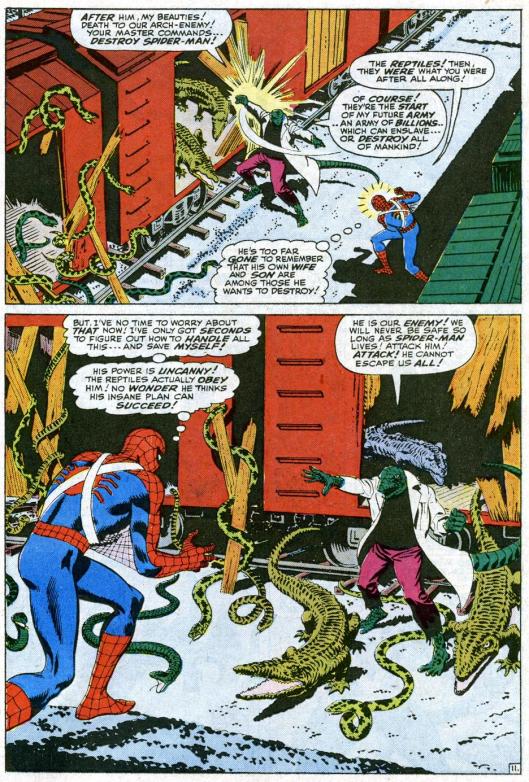 Stan Lee and John Romita spun one of our favorite Lizard stories in this two-part epic from 1967. The Lizard totally freaks out (as usual) and knocks Spider-man off the side of a building. Spidey in a splint?! Oh no! But getting a little banged-up doesn’t stop Spidey from a spectacular showdown with The Lizard at a railway station. Guess what’s on the train… Thousands of hideous reptiles! YES! 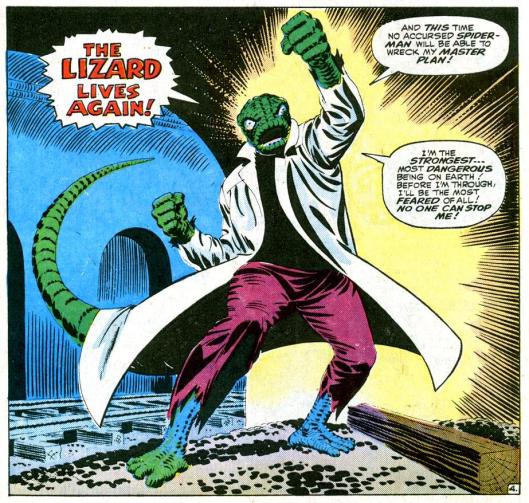 Too bad Spider-man shows up to give Dr. Curt “The Lizard” Connors his medicine and make him all normal again. Shucks! Didn’t you ever just want The Lizard to win for once?

Enjoy the scene in our gallery below. It’s the very first showdown between Spider-man and The Lizard! 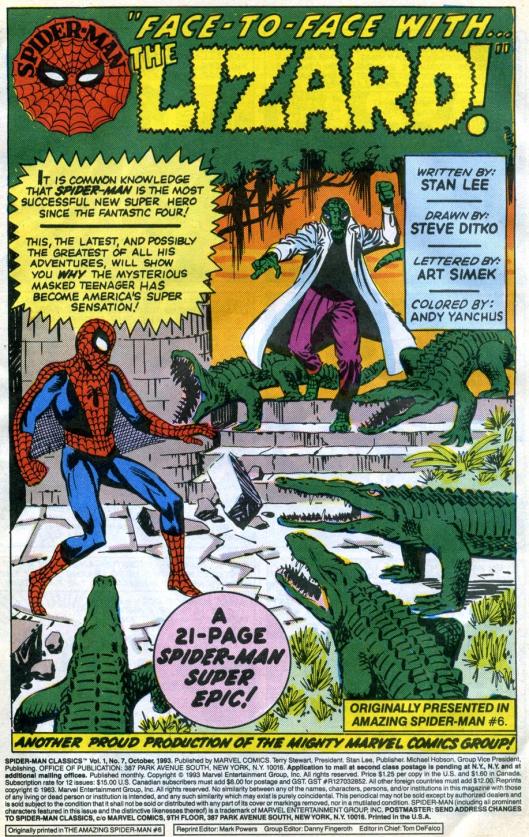 It Had to Happen! Spider-man meets Dr. Doom for the first time. Stan Lee and Steve Ditko take us inside Doom’s secret hideaway. There, we witness web-head battle a barrage of high-tech gadgets in a spectacular display of Ditko fireworks and special effects! Check it out! 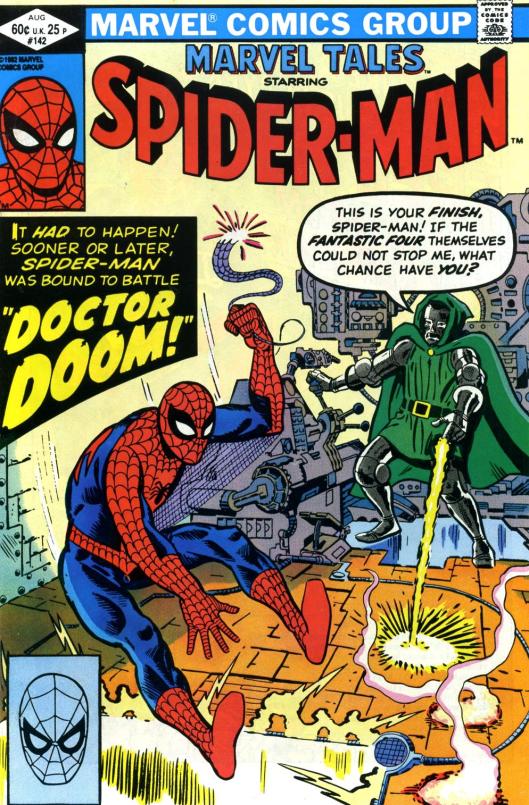 Medusa, a member of the Inhumans, comes to New York City to study the humans. She tangles with Spider-man on the rooftops – all a big misunderstanding, of course. Then she decides to study people by… getting a job?! But the sleazebag who hires her to promote his line of hair products only causes more grief for the ol’ web-slinger. We took the liberty of editing out all the sub-plots from this issue so you can just kick back and enjoy Marvel’s hottest heroine and the amazing wall-crawler going toe to toe. 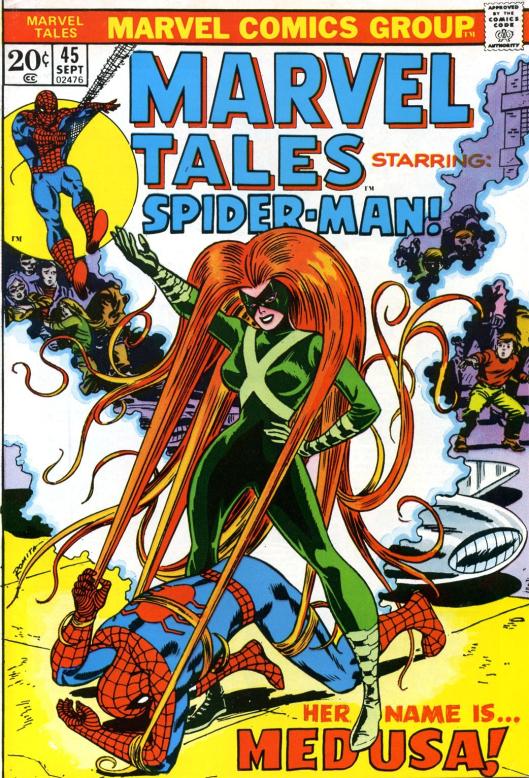 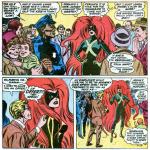 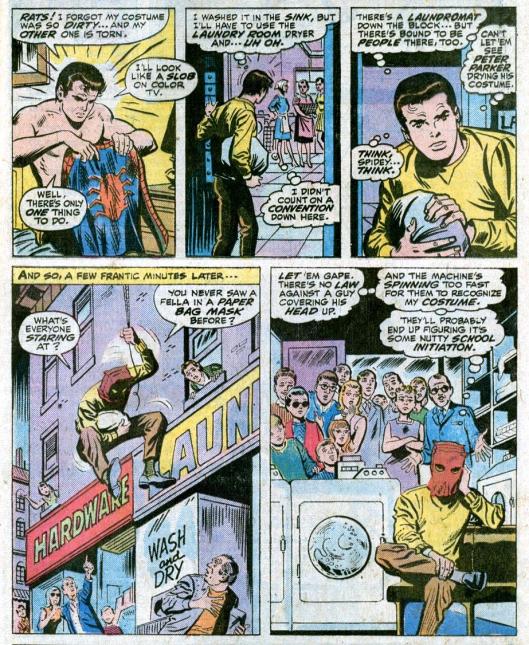 Spider-man probably spends more time than any other superhero attending to his domestic chores. Sure, Dr. Doom cooks dinner, Superman vacuums his fortress – but when do they ever worry about their costumes getting dirty?

Spider-man, the original hard-luck hero, shows us how to get your laundry done at the laundromat without blowing your secret identity!

By Stan Lee and John Romita with Jim Mooney. 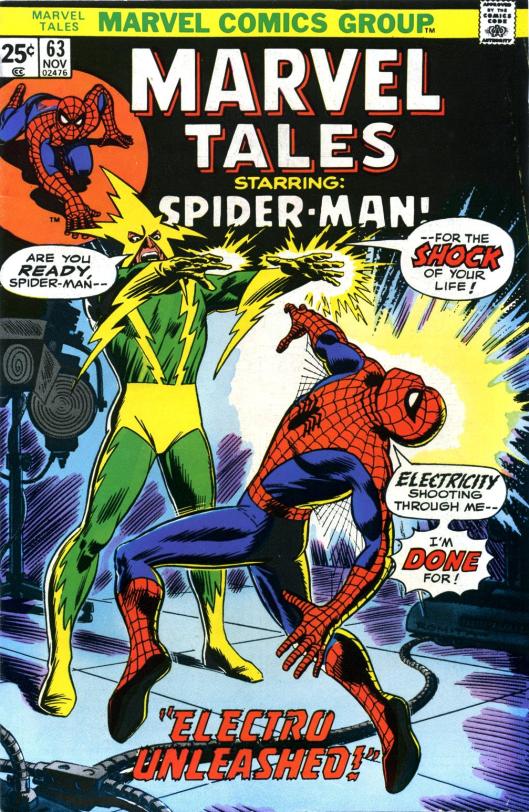