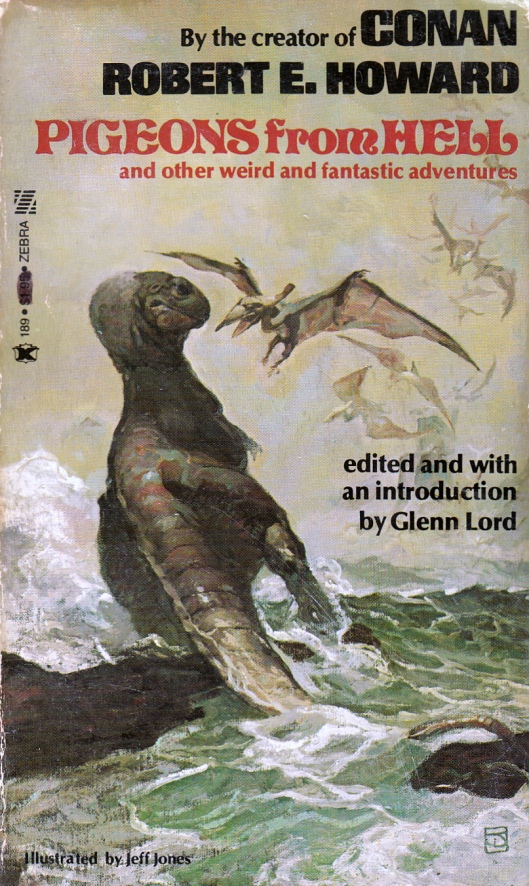 As a big fan of Dark Horse Comics’ recent adaptations of Conan, I hoped to find adventure in some of Robert E. Howard’s other stories. The Dark Horse series often featured on their letters pages, in the original single issues, short comic strips about Howard’s life taken from his memoirs. So, when I purchased this 1976 edition of Pigeons from Hell, finding a brief bio from Robert E. Howard himself made for an unexpected treat.

And yes, the deciding factor on choosing this book was the awesome dinosaur painting, by artist Jeff Jones, on the cover. Jones led an interesting life, at one point marrying comic book writer Louise Simonson and later living as a female under the name Jeffrey Catherine Jones. You can find a small sample of Jones’ 100+ book covers in this free online gallery. I tried to find a decent collection on Amazon to link for you, but they all seem to have their shortcomings. If you know a complete collection with high-quality reproductions, please leave a note in the comments section here.

All but one of the thirteen stories inside originally saw publication in Weird Tales from 1925 to 1938. Combining elements of horror, fantasy, and western genres, they all read as fairly straight-forward narratives. Howard provides some creepy moments but not really any shocking twists and turns – at least, not by today’s standards where movie audiences expect some kind of revelation to re-frame everything at the end of the story.

On the downside, this edition suffers from poor proofreading, with several typos per story. You might prefer to spend a couple more dollars than I did and get a more recent edition. And as an editor, I would have reduced the reliance on semi-colons and extended sentences with multiple clauses. In general, Howard’s prose is fast-moving and tight, but it could use a little editorial tune-up to hone its edge. If you can get beyond these minor quibbles, though, most of these stories make for a good, quick read and would be well-suited for adaptations as comic books.

Below, you can read the pages from the introduction, a letter from Robert E. Howard about his life and his thoughts on writing. The first paragraph is by Glenn Lord, an agent for Howard’s estate. 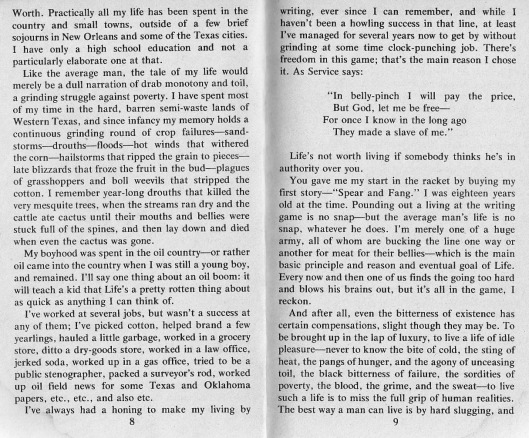