In January, graphic journalist Joe Sacco gave this hour-long interview at the Michigan Theater in Ann Arbor. From his journeys to war-torn nations in the Middle East, to an examination of his creative process, the discussion brings together art, history, and concern for human rights. See Joe’s books currently available at Fantagraphics.

Author Paul O’Connor joins us today for an interview about his newly launched digital comic book story 4 Seconds. You can read 4 Seconds for free at Mark Waid’s Thrillbent. Paul discusses with us the technical side of producing a story for Thrillbent’s unique reading platform, including how he invented a new scripting technique working with artist Billy King on the initial concept design and artist Karl Kesel on the final story.

Paul, what is 4 Seconds and how did it come about?

4 Seconds is an original comic story in digital form published at Mark Waid’s Thrillbent site. It is free to read right now, and I hope everyone will give it a shot. The story is self-contained and easy to complete in one sitting. It tells the tale of a petty thief who discovers she can see into the future… but only 4 seconds into the future! This proves to be just enough superpower to get her into trouble.

The story was born when I won Mark Waid’s open-microphone pitch contest at San Diego Comic-Con. I was super-excited for this job, because I am a big believer in the new way stories can be told at Thrillbent. There are dozens of stories at the site, many of them are free, and they all have something to say about how comic stories can be told beyond the printed page.

As someone who makes books, I’d love to hear about the technical side of creating 4 Seconds specifically for the Thrillbent digital format. What’s unique about Thrillbent compared to printed comics, or even other digital platforms?

Even during the pitch stage, it was important to me that I create a story best told (or perhaps only told) in the Thrillbent format. Thrillbent specializes in digital-native stories that expand the way comics stories are told. It is critical to understand that these are still comics stories. They aren’t motion comics, and they don’t have soundtracks or spoken dialogue. They are still words, pictures, and panels that the reader pages through at their own pace.

One way things are different is in the fluidity of transitions afforded by this platform. For instance, we can do actual fades, wipes, and pans, imparting a more cinematic feel to a traditional comics story. Likewise, this platform allows for new types of page architecture and panel borders, and new approaches to balloon placement and dialogue construction. In creating 4 Seconds, artist Karl Kesel and I tried to take full advantage of being in a paperless environment, and using this platform to tell our story in a more memorable way. 4 Seconds is built from the ground-up to be a new thing in familiar clothing.

Tell me how those possibilities came to life in creating a scene from 4 Seconds.

For example, we might have a “master shot”—say, a nighttime interior of the mansion of the villainous Anton Glass. Rather than show the entire shot at once, our story might reveal it in portions—first showing just that slice illuminated by the moody moonlight leaking through the floor-to-ceiling windows, then picking up the trail of bloody footprints on the floor, then finding the outstretched hand of a body lying just inside the shadows.

Across this, we place our characters, posing them for the critical moments of storytelling. And then we bring in dialogue balloons, captions, and sound effects. What Karl had to deliver were all the many individual panels, frames, and character poses that made up the story, which are then placed in the correct order for viewing via Thrillbent.

The results are equivalent to what might be many panels and pages in a paper comic, all playing out in the same narrative space using comic conventions of panels to parse time and focus reader attention on the sequential elements needed to tell the story. It’s still the same toolbox used in conventional comics, but there’s greater freedom of expression in how it’s used, particularly when it comes to isolating specific elements that you want the reader to see.

How was writing the 4 Seconds script different from comic scripts you’ve written for other media? Was it anything like a traditional comic book script?

This was a very different process. The Thrillbent format demanded that I take a new approach to scripting, and I also challenged myself to think in visual terms from the get-go. I deliberately went outside of my comfort zone of concentrating on dialogue and description and leaving everything else up to the artist. Instead, I wanted to provide a deeply thought-out visual blueprint for Karl, which he could (and did!) use as a springboard to make things even better in the penciling stage.

That meant I was doing scene-blocking and transitions—new things for me—and also figuring out how to break the rules as fast as I made them! To tie it all together, I invented a hybrid script form that offers conventional comics direction, dialogue, etc., but abandoned panels as the unit of storytelling in favor of frame advances. Determining how much information to add/change to each advance drives the pace of the story, and sometimes the challenge is as much about deciding what to retain from previous frames more than it is about what to add.

Thank you, Paul! 4 Seconds keeps the twists and turns coming right up to the very end. Revealing the story in frames like this means readers share Cassie’s experience of her world. They know something is coming in that empty space of the future, but they can’t see far enough ahead to be sure what it is. I found it drew me into the story and made me care that much more about what happened to her. 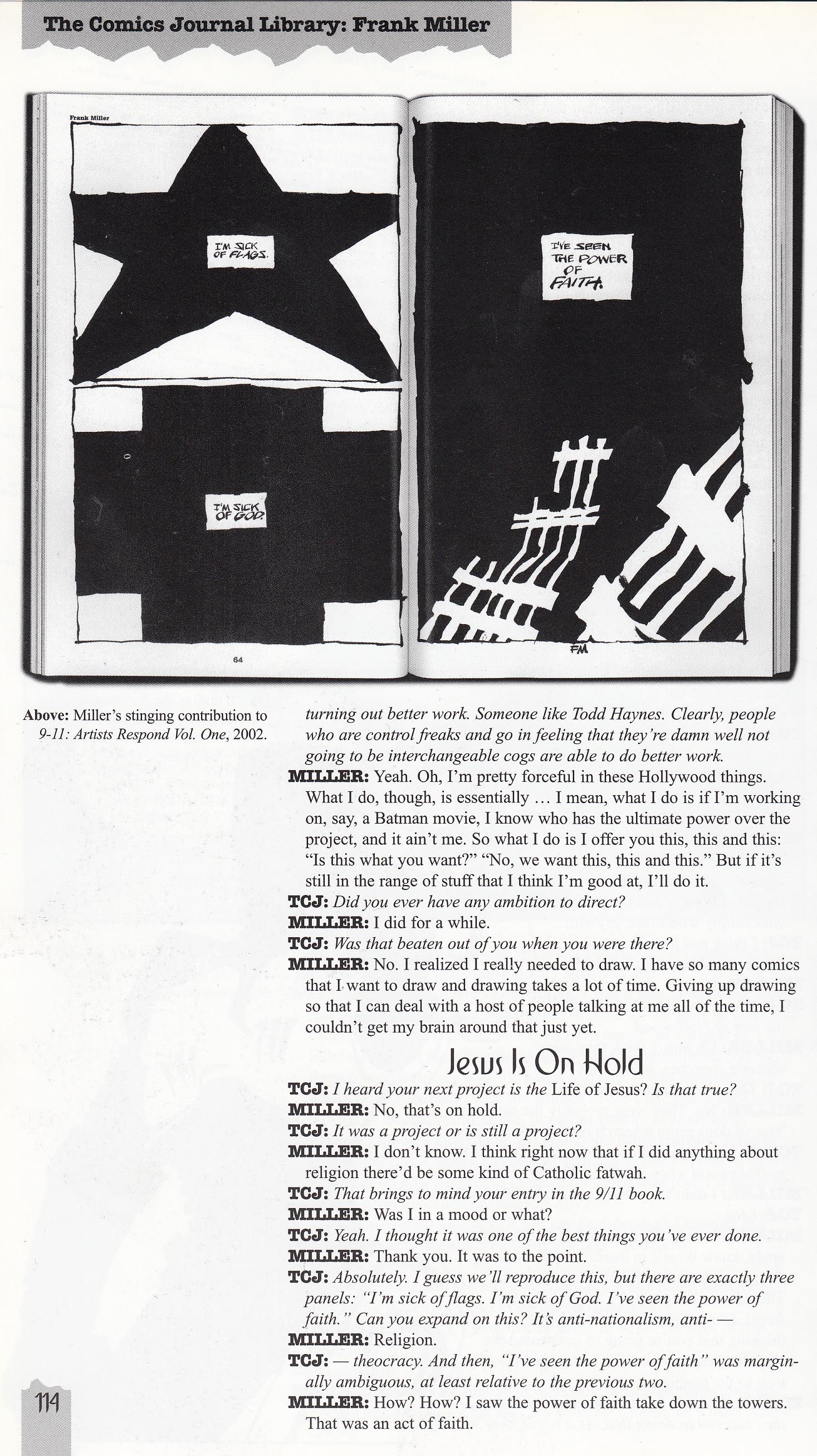 This wonderfully over-sized tome contains rare and classic Frank Miller art, covers, and page layouts to illustrate six interviews and an essay. Gary Groth takes three of the interviews, and Kim Thompson has one. Its 130 lavish pages give you candid moments with Miller the artist at important phases in his career from 1981 to 2003.

The final interview explores Miller’s response to the attacks on the World Trade Center. His stark, simple images speak powerfully in his two-page contribution to 9-11: Artists Respond Vol. 1. Groth doesn’t seem to get the point right away, but excels at giving Miller an opportunity to speak his mind. What begins with an inquiry into an abandoned project about the life of Jesus of Nazareth turns to a discussion of comics as war-time propaganda. Miller expresses ideas which we now know became the book Holy Terror.

Miller and Groth discuss the two things you never want to talk about at a party: religion and politics. In other interviews in this book, they sometimes disagree. This makes for spirited discussions and an outstanding read.

Miller also talks about his anti-censorship work, characters he created or left his mark on, and the nuts and bolts of actually producing ground-breaking work. In one of our favorite anecdotes, he recalls how he and Lynn Varley collaborated with their printer to create a new process for handling the nearly all-black pages in Ronin. Here we get a sense of Miller as an inventor on the cutting edge of comic book art production.

The images below are not the complete interview, which spans twelve pages. But, they give you a taste of the art and ideas within. We love huge books, great conversations, and Frank Miller’s art. This book handsomely delivers all three.