No collection of pure dinosaur comics is complete without the mother of all dinosaur comics, Young Earth! Young Earth appeared in the golden age comic, Turok Son of Stone. Published first under the Dell imprint and then by Gold Key, Turok sees the light of day again in an archival reprint series by Dark Horse. We will share with you the complete original educational series of dinosaurs, prehistoric mammals, and other animals of prehistoric earth. Enjoy!

Today we share with you all four Dinosauria features from Turok Son of Stone issues #1-69. We’re not sure why the editors began running this feature under its own name instead of just calling it Young Earth, but who cares? It’s awesome dinosaur time!

Today you’ll meet styracosaurus, iguanodon (who seems to be dancing?!), ankylosaurus, and protoceratops – menaced of course by that darn Tyrannosaurus Rex, with a special appearance by an uncredited Ornithomimus snacking on some dino eggs! 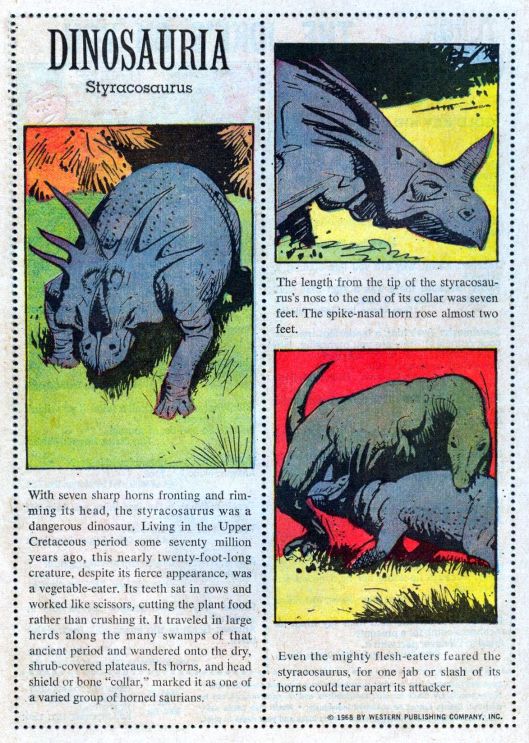 We invite you to:
Shop for original issues of Turok.
Choose an archival edition of Turok

.
Browse our galleries of Dinosaurs or Dinosaur Comics.
See all our Young Earth or Turok exhibits.
Like Young Earth? You’ll love Age of Reptiles and Prehistoric Mammals.