Even though retail prices have come down from their 1990s peaks on Amazing Spider-man issues by David Michelinie and Todd McFarlane, collecting them all could still put a big dent in your wallet. Those readers on a sacred mission to collect every issue of Amazing Spider-man will overcome this challenge. The rest of us wouldn’t mind having them collected in three trade paperbacks.

Marvel complicated things by publishing the three paperbacks under two different banners. Readers searching in databases at retailers or libraries might find one, but not the other. Let us clear things up for you.

The first of the three is under the “Visionaries” banner. You can find many good stories from Marvel’s flagship characters in various Visionaries collections. The Todd MacFarlane one includes Amazing Spider-man #298-305, notable for taking Spidey’s black suit from the first Marvel Superheroes Secret Wars and bonding it to Eddie Brock to create Venom. Spider-man Visionaries Todd McFarlane #1 is listed at MyComicShop and Amazon.

Marvel then moved the series over to the “Marvel Legends” banner. The first of the two Marvel Legends collects Amazing Spider-man #306-314, plus a story from Spectacular Spider-man Annual #10 with McFarlane art. This one may be our favorite of the series. We can’t find it at MyComicShop, but it is listed correctly on Amazon despite not having the right cover currently.

Marvel wrapped it up with a second Legends collection that includes Amazing Spider-man #315-323, #325, and #328. Although the listing on Amazon doesn’t have the right cover at the time of this post, it is the right book.

As much as we love McFarlane’s rendering of Spidey’s world, these stories succeed in large part due to Michelinie’s writing. It’s a shame these collections dont say “Michelinie and McFarlane” on them. Marvel remedied that bit of rudeness in 2011 by printing the Amazing Spider-man Omnibus by David Micheline and Todd McFarlane. Last time we checked, you could get one for about $100.

The collections are an enjoyable romp through Spidey’s rogues’ gallery, with drama, humor, and interesting developments in the lives of newlyweds Mary Jane Watson-Parker and her wall-crawling hubby. Michelinie breaks with the “hard-luck hero” tradition of Spidey. Peter Parker marries an incredibly fun, smart, super-model. He gets famous for his Spider-man photos in the Daily Bugle and goes on a book-signing tour. Peter and Mary Jane move into a nice place. They have some money for a change, and even Aunt May has a cool boyfriend now. This was a fresh approach to the character at the time. It reminded us that even though Parker has lots of bad luck, he still totally kicks ass.

Spidey looks great zipping through these books in a mass of webs with a look McFarlane seems to have invented. The webs have since been copied, but we don’t recall ever seeing anyone draw Spidey’s webs like McFarlane before these books.

The creative team brought back one of our favorite Spidey supporting characters: the Prowler. In the Prowler’s claws, mask, and swirling cape, you might be witnessing McFarlane get the ideas for his Spawn character worked out on the page in these Spidey stories.

The following bonus “pin-up” was also printed as a postcard by Marvel, and we’ve always loved this image.

Venom’s gleeful sadism and obvious mental illness are good signs he might be a keeper as a Spidey villain.

Another nut job and total loser from Spidey’s gallery of bad guys shows up: the Scorpion. The Scorpion never looked so awesome as he did in this story. Spidey must rescue J. Jonah Jameson from the guy in green armored tights with a fatal tail. It’s a hoot.

McFarlane made his mark on The Lizard, too. Just a hideous rage ball of claws and teeth. McFarlane would again draw our favorite evil reptile in a lab coat when he started his own Spider-man series.

Spidey looks pretty awesome crouching in the snow in a graveyard.

And that’s all the photos we had time to snap before selling these wonderful books on eBay. We read them not long after they first came out, in their original single issue form. It was fun to read through them again and enjoy them in these collections. It’s a good chunk of Spidey stories that deserves a place on even a casual Spidey collector’s shelf.

Many before us have sung the praises of the Len Wein and Berni Wrightson stories that kick off the first volume of Swamp Thing stories. Have you seen the first issue of Swamp Thing? We might be in the minority, but the first chunk of issues where Swamp Thing takes on some pretty generic monsters seem like merelyt a warm-up for further greatness.

Even the Batman crossover in #7 fails to get our engines revved. But then: issue #8 comes along. Swamp Thing encounters a demon in a cave on the outskirts of a small town, giving us a dark visual feast that brings the series to life for us. The Lurker in Tunnel 13 may be the first of the early tales that hints at what Swamp Thing would later become in the 1980s –the first appearance of Arcane notwithstanding. It’s cosmic, satanic, horrific, and sports one of our favorite Wrightson covers.

Wein and Wrightson also present a great story about a stranded alien trying to repair his ship and return to the stars. Making this freakish beast sympathetic and compassionate reminds us that monsters and heroes come in many forms.

Before leaving the book, Wein & Wrightson deliver the consummately creepy Man Who Would Not Die, the first return of Arcane from the hell where he deserves to stay. The confrontation between Arcane and Swampy in a graveyard may be our favorite artistic moment of Wrightson’s legendary contributions.

Nestor Redondo steps into Wrightson’s shoes without missing a beat, working with Len Wein on three issues before David Michelinie takes the reins. We have some other images of Nestor Redondo’s Swamp Thing art if you’d like to check them out.

Michelinie and Redondo seem to lose steam towards the end of their contribution, and what happens next is a bit of a disappointment. The creative team changes, and the book loses much of its horror appeal quickly. Readers must have felt the same way at the time, as Swamp Thing would soon be cancelled. Swamp Thing’s gambit to revert to a normal Alec Holland once again just doesn’t work for us, and it’s been more or less ignored in subsequent Swampy stories.

The end of the volume is a bit of a mess, but the early stories have definite high points. We sold our collection of VG+/FN issues — almost a complete run — on eBay. But a few of them we would be happy to collect and read again. You can get many of the early Wein/Wrightson issues in Roots of the Swamp Thing reprints.

Having owned both the reprints and the originals, we prefer the originals. Though the printing and color is more crisp and clean and bright in the reprints, the vintage horror vibe feels much more authentic with a well-worn copy from the early 1970s, the smell of tanned comic book paper, and the distinctive original covers.

Men of War #1 gives us the first half of the origin of Gravedigger in his first appearance in DC Comics. Author David Michelinie would conclude next issue with a tale of Gravedigger’s breaking into a military installation, an unlikely story that plays well as a comic book nevertheless. Gravedigger earns his nickname digging graves in a non-combat unit. He wants to fight in the war, but the color of his skin gets him assigned to an all-black non-combat unit.

While films and novels have dealt with racism in the military before, Michelinie sticks to a theme of institutional racism. We do not see Gravedigger suffer from physical and verbal abuse, but we do see him confronting a racist system. Artists Ed Davis and Romeo Tanghal deliver a realistic style in the vein of DC’s other 1970s war comics like Sgt. Rock. Let’s have a look! 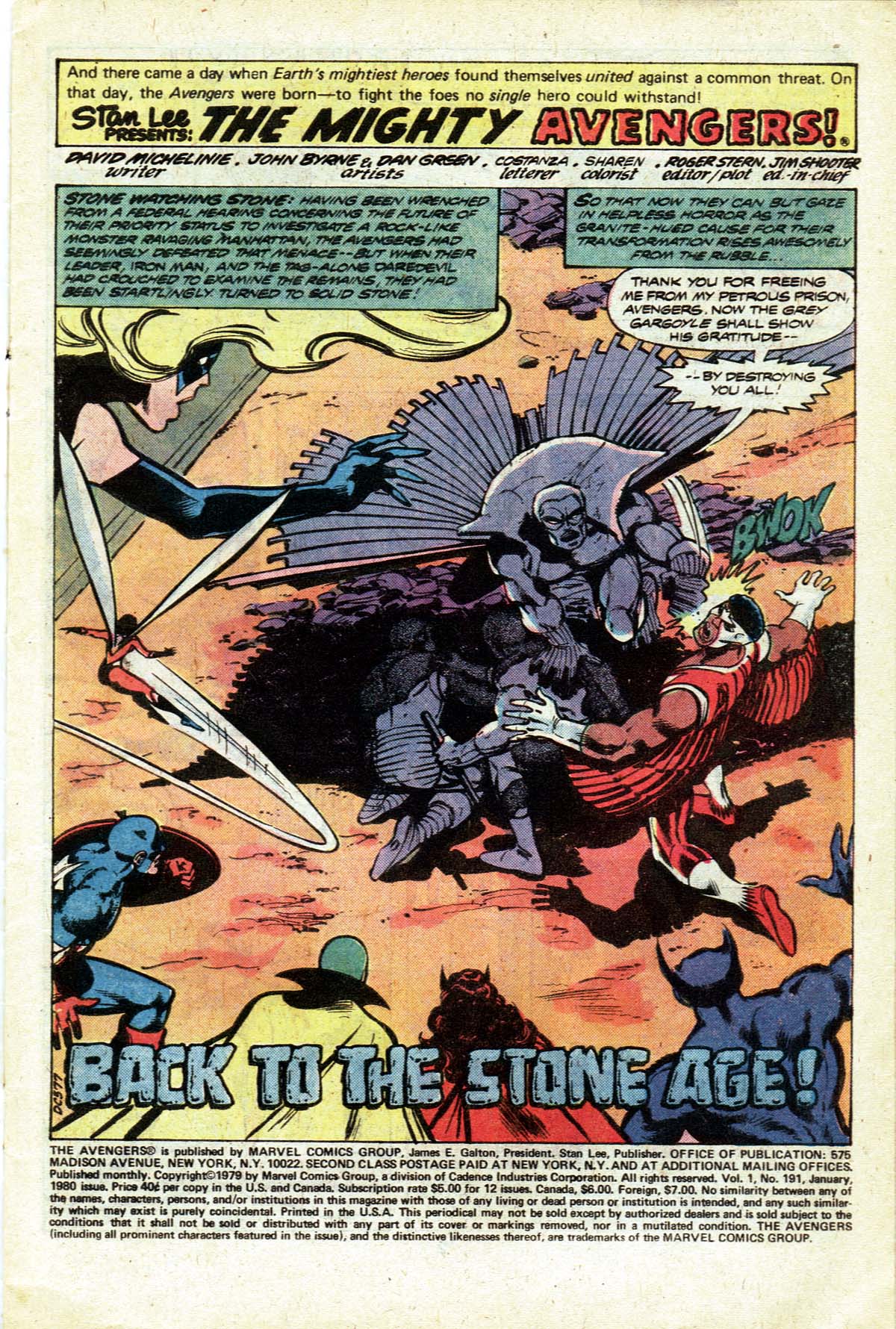 John Byrne pencils one of our favorite Grey Gargoyle appearances in Avengers #191, with the plot/script team of Roger Stern and David Michelinie. Great things were simmering in the pot here: Stern and Byrne would craft a short but memorable run on Captain America, David Michelinie was just a few years from making Spider-man a super-hot franchise with Todd McFarlane, and cover artist George Perez would soon be teaming up with Marv Wolfman to create the wildly successful relaunch of Teen Titans.
Here, however, they prove that most superhero problems can be solved with lots of punching, kicking, beating, hitting, smashing… and a magic ray.

Collector’s Guide:
– from Avengers #191; Marvel, 1980.
– Reprinted in the paperback collection Avengers Visionaries: George Perez. Dont ask us why, since Perez did the cover, not the interior art!

Along the way to comic book superstardom, John Byrne drew the Avengers for a year – a year Bronze Age fans remember fondly. Here is where that legendary stint began. In Avengers #181, writer David Michelinie used a mandate from the federal government to pare down the number of Avengers. This plot device gave us one of the more memorable moments for agent Peter Gyrich, whose apparent main function was to be a major pain in the butt.

Avengers #200 is one of those sprawling epics of an ‘anniversary’ issue that makes just about zero effing sense. It has a lot of action, and a lot of wondering what the heck is going on — true hallmarks of monumental superhero milestones. By the time you hit the big flashback that reveals how Carol “Ms. Marvel” Danvers got pregnant for only three days, your suspension of disbelief may have taken too many hits to recover.

But, it has George Perez on pencils, and a huge dinosaur bashing around New York City. That’s enough for a bicentennial! Roll ’em!

This issue is NOT included in the paperback collection Avengers Visionaries: George Perez.

Amazing Spider-man #347 brings a multi-part Spider-man story to its climactic conclusion in “The Boneyard Hop.” On a deserted island, Spidey and Venom wage a life-or-death battle. While many Spider-man villains pursue the usual world domination or petty heists for their own self-interest, Venom gleefully revels in the sheer horror he can inflict on Spider-man.

Writer David Michelinie first brought together Eddie Brock and Spidey’s black “symbiote” suit to form Venom. The art team of Erik Larsen and Randy Emberlin carry the stylistic torch established by the previous penciller, Todd McFarlane. Together, they make Venom just as much fun as he is evil!

We also enjoy the look Larsen brought to Spidey’s traditional threads, filling in most or all of the blue areas with black. Some fans disagreed with this rendition, but we love it. Bring back the red and black!

Mark Ginocchio, who chronicles his quest to collect every issue of Amazing Spider-man at Chasing Amazing, counts this as his fourth favorite Spider-man battle of all time.

Let’s take a look at the scene from the Avengers where the Scarlet Witch and Quicksilver are born. The tale of their birth comes to us in a flashback by Bova. No, not sci-fi author Ben Bova! Bova is a humanoid cow created by the High Evolutionary. We don’t know if Bova is still single. But if she is, we’ll hook her up with a date with Hip Flask of the Elephantmen. They’d hit it right off!