Psychotic Adventures #2 is the second of three issues by Charles Dallas, published in 1974 by Last Gasp. You only rarely see them in stock at MyComicShop, so I went directly to Last Gasp for my copy. Last Gasp is also currently out of stock, so maybe I got one of the last available copies on Earth.

The other two issues of Psychotic Adventures contain several short stories. You can see some of them in my Psychotic Adventures archive. This one, however, features a non-stop, no-advertisements, action/adventure story of epic scale–a story that doesn’t stop until the back cover of the book! The hero and his comrades endure the most horrifying tragedies and injustices, but they press forward with indomitable spirits, no matter what.

This story earns more than just a spot in my second round of Top Ten Favorite Single Comic Book Issues. Though I never discovered this title until a couple years after starting this blog, it has risen to the top of my hallowed short boxes of glory to claim its spot as the most awesome comic book I have ever read. 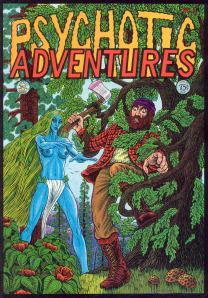 “The Death of Doctor Dark” – as creepy as it is alliterative! This bone-chilling tale comes from issue #3 of Psychotic Adventures by Charles Dallas!

Did you miss a post? Check out our galleries of Psychotic Adventures, Indie Comics, and Last Gasp comics. Enjoy!

Here is another story from the first issue of Psychotic Adventures by Charles Dallas! “The Book of Zee” tells of giant insects, the struggles and ultimate fate of cubicle man, the destruction and rebirth of the planet earth, and the terrible future that awaits us all.

Sound fun? Frankly, it’s rather disturbing, as a psychotic adventure should be.

Psychotic Adventures – what a way to kick off the ghastly, ghoulish month of October!

Last Gasp published three issues of Psychotic Adventures in 1974 featuring the work of the psuedonymous Charles Dallas, Jr. We admittedly know nothing about him other than he also did work for Kitchen Sink and had one twisted imagination.

The story “Underground Artist” may be a tongue-in-cheek reference to Dallas’ work in underground comix, but it’s anything but funny.

Frankly, it’s rather disturbing, as a psychotic adventure should be.