When Joe Quesada eliminated all representations of smoking years ago at Marvel, he took a major stand against a propaganda campaign that Marvel had pushed for years.

In the 1970’s, an era of rampant drug use and the dissolution of the nuclear family, Mighty Marvel’s Bullpen was at the front lines of the corruption of the American mind. Here, the so-called Incredible Hulk delivers a not-so-subtle message to troubled youth. 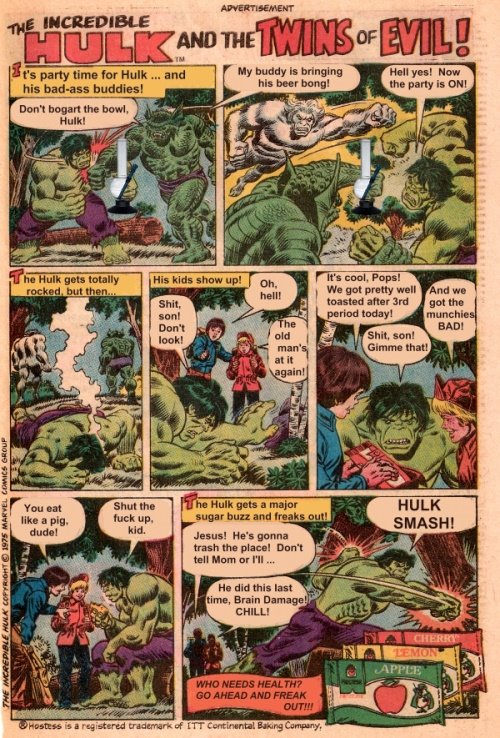 Nuclear power was sold as safe and friendly to the American public – and the minds of children were an atomic battleground. If you need any more proof that the military-industrial complex was pushing nuclear power to children, just look at what they were up to in 1974! 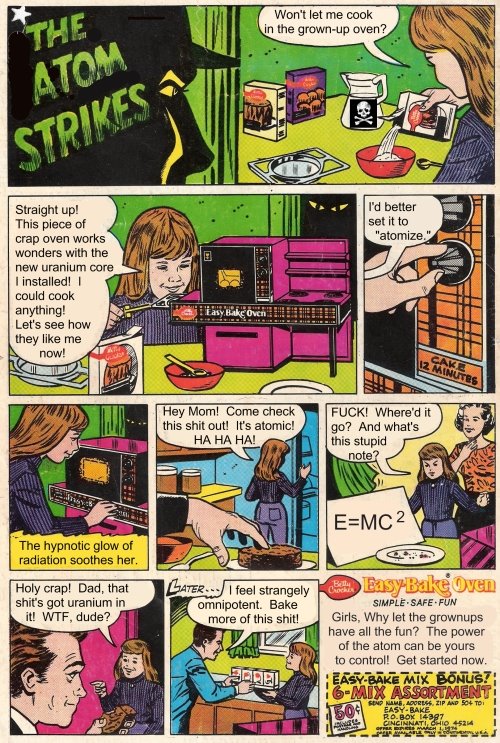 Things didn’t get any better in comic books in the 1980’s. Children were still bombarded with moral relativism and other heinous activities in the form of seemingly innocent messages from pop icons. 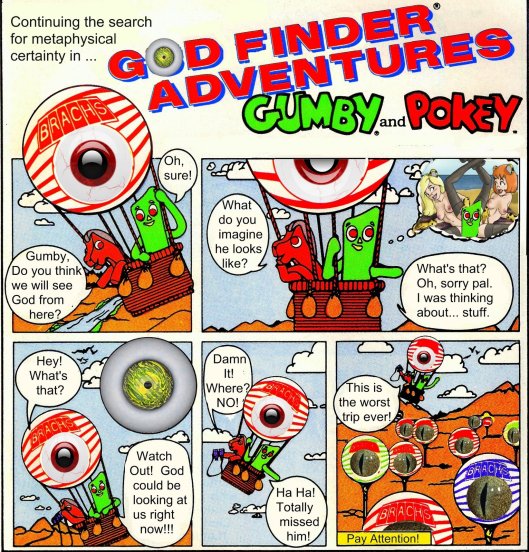 As we examine the moral turpitude of comic books, we must never forget the new low reached by DC in the 2000’s. When Marvel’s Editor In Chief Joe Quesada banned all depictions of smoking, DC moved to capture the youth smoking market by unveiling the new JSA – The Juvenile Smoking Association.

In this reprehensible title, all characters constantly chain-smoked, often winning victories over their villians through their superhuman, nicotine-enhanced abilities. Featured revisions of classic DC characters in this outrage included Smokerman, Buttman, Hackman & Hackwoman, ‘Reds’ Lantern, the Black Lung Canary, and a version of the Flash that could smoke a carton in the blink of an eye. 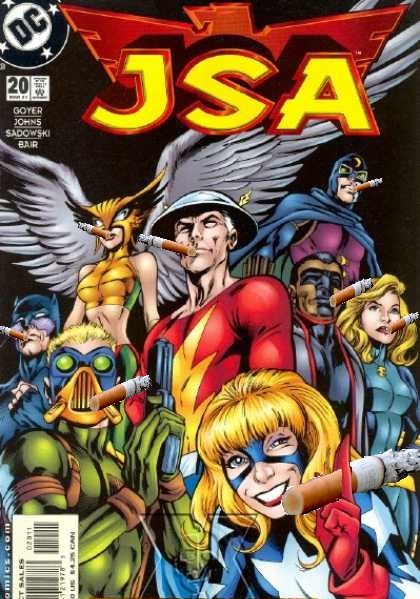 Even as DC continued to promote smoking to children with The Juvenile Smoking Association, Marvel struck even harder with this piece of muck-raking work exposing the manipulation of children into massive amounts of over-priced sugar consumption using toys and trinkets and other “free” promotions. 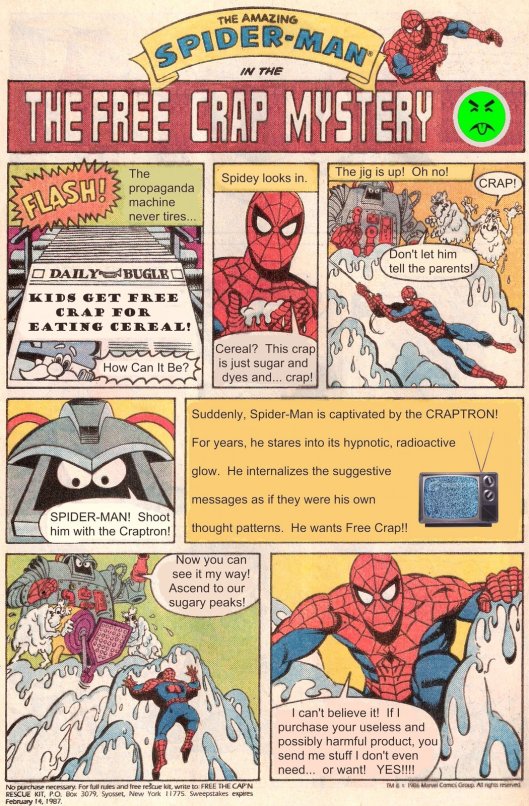 It didn’t stop with Marvel and DC, though – this war on the values of our children. With violence at school on the rise, Image moved to capture the violent youth market by publishing ultra-violent and satanic titles like Spawn. They filled the books with advertising funded by pro-violence special interests. This ad shows how guns and violence were pushed upon minors as a form of acceptable entertainment years before video games like Grand Theft Auto and the new Wii M-16 Assault Rifle became so popular. 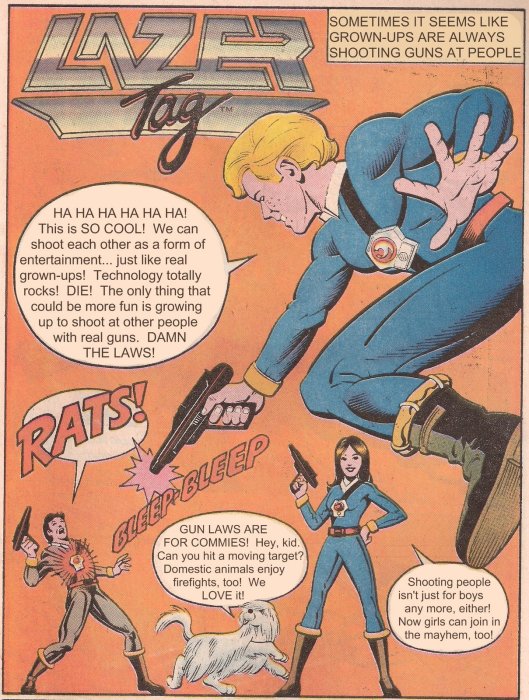 Unless you were raised on Neptune, you’ve seen Marvel Value Stamps from the 1970s. Maybe you even have all the issues with Marvel Value Stamps. And maybe you even cut all of them out and pasted them in the collector’s book. First, we would like to slap you for cutting up those comic books – and then congratulate you on your fervently feverish will to collect.

But recently we found this amazing piece of work from DC. No need to buy 50 different issues and cut them all to ribbons, guys – DC printed all their stamps on one page! Take that, Marvel! 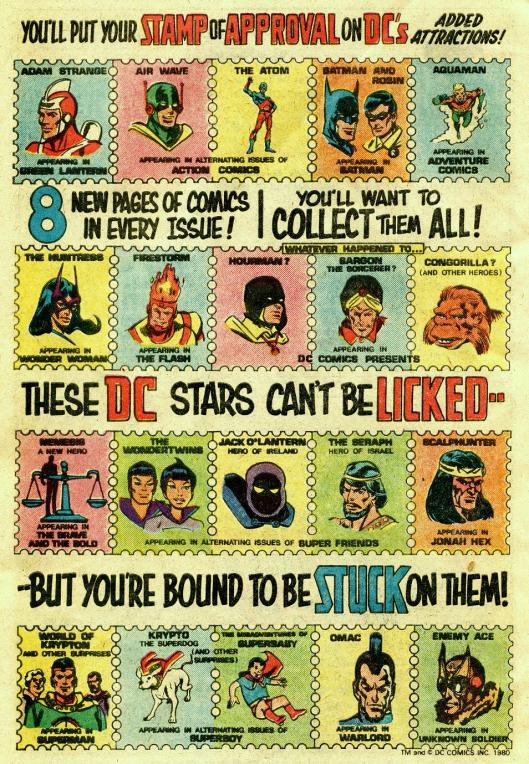 You can still find Marvel Value Stamps in Marvel comics from the 1970’s – unless some rabid fan-boy cut the damn thing out and put it in his Stamp Book! We’ve included our modest collection of Marvel Value Stamps for your viewing pleasure, along with some references to their source books. We do not have anywhere near a complete set but can’t resist scanning them whenever they show up.

Once you’ve sated your lust for Marvel Value Stamps, visit our post about DC Value Stamps to see the response from the Distinguished Competition! 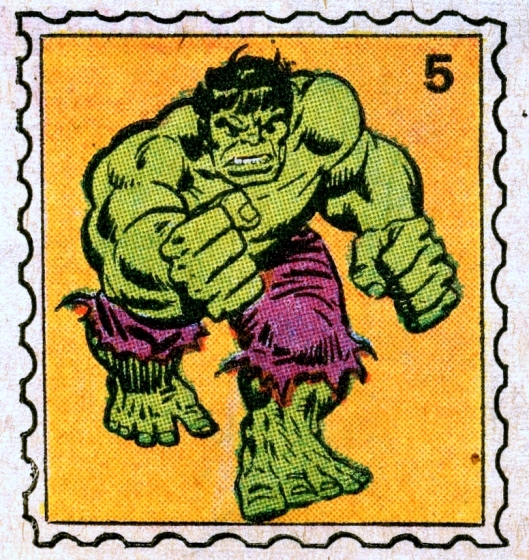 Hulk Stamp 5
Not a part of either Series A or Series B Value Stamps, this numbered Hulk stamp appeared on the Bullpen Bonus page in issues with a cover month/date of March 1974. In Series A, the Hulk Stamp was number 2 and had different artwork. 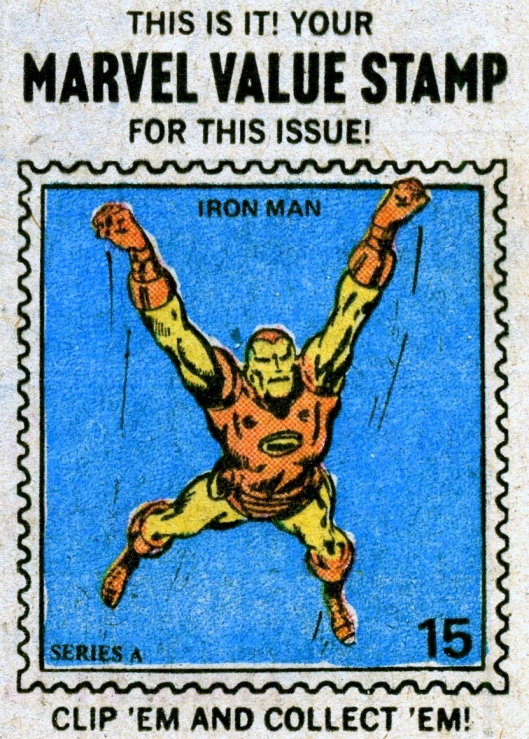 Iron Man Value Stamp 5
– From Creatures on the Loose #28 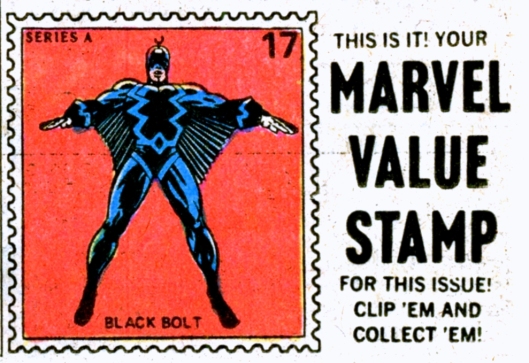 Black Bolt Value Stamp 17– From Ka-Zar #6
You can read this entire killer dinosaur issue at Diversions of the Groovy Kind. 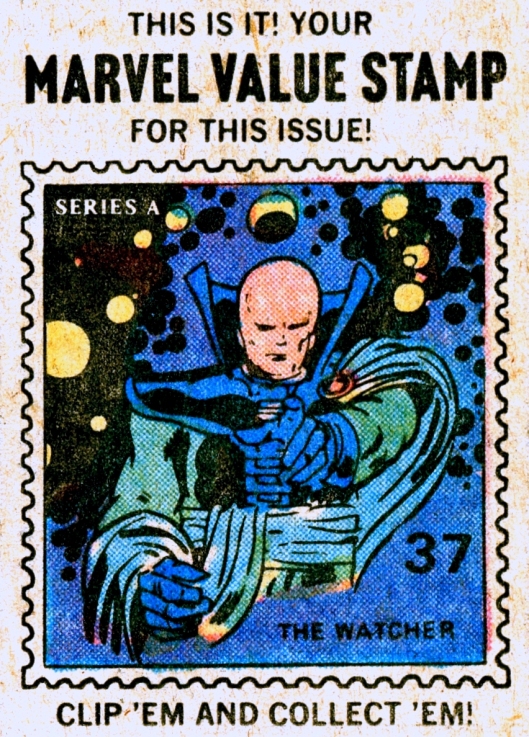 Watcher Value Stamp 37
– From Creatures on the Loose #29 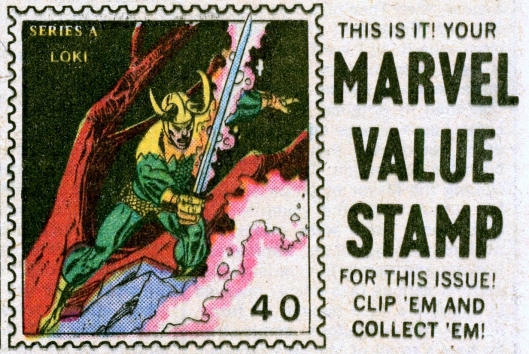 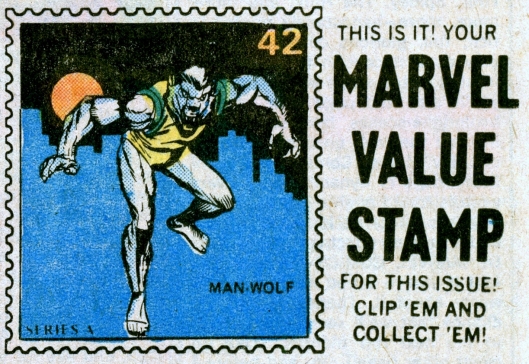 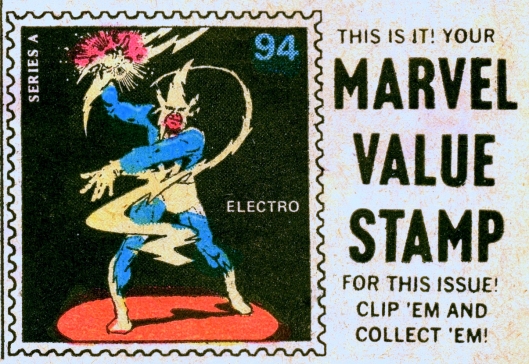 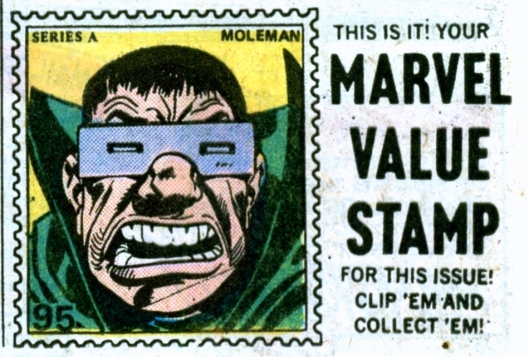 Mole Man Value Stamp 95
– From Ka-Zar #12
We have excerpts of this dinosaur-loaded issue at Lizard Men! We are Lost! 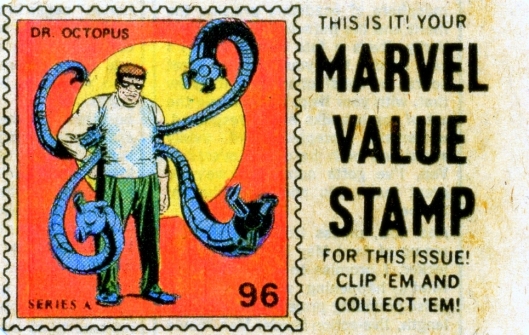 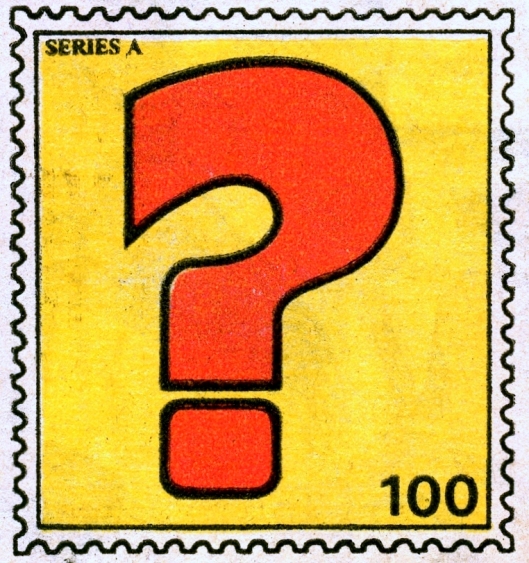 “Teaser” Value Stamp 100
This question mark stamp appeared on the Bullpen Bonus Page in issues with a cover month/date of April 1974. It was “teased” the appearance of the real Stamp #100, Galactus. 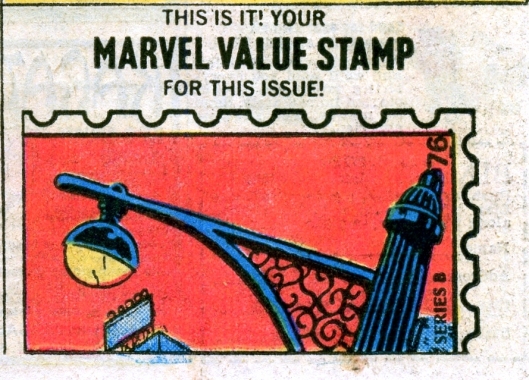 Series B Value Stamp 76
Combined with other stamps to make a larger picture of Hulk smashing.
– From Avengers #147