Line of Thought by Peter Deligdisch is long overdue for a spotlight here at Mars Will Send No More. For maybe two years now, Line of Thought has inspired me. Filled with complex and often abstract drawings, this completely black and white book gives me an instant trip to an art museum. It’s the cup of ink-black coffee that wakes me up when my artistic spirit is lagging. 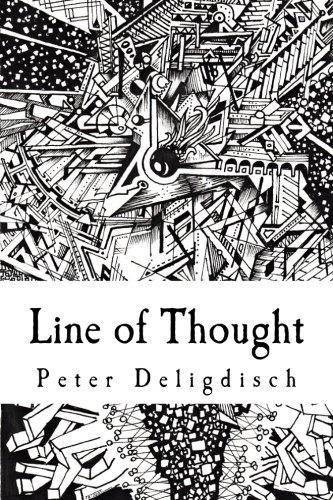 Line of Thought by Peter Deligdisch

Peter’s newest work is called Almanac, which you can see at http://www.peterdraws.com/#almanac

Maybe you’ve already discovered Peter’s artwork on YouTube or, like me, on Reddit. Line of Thought collects many of his more polished works alongside a few odds and ends that make the book feel like an intimate look at the artist’s sketchbook. I like that kind of thing, but some reviewers criticized the book for not being print-quality reproductions and for including what they felt were doodles.

I enjoy Line of Thought‘s resemblance to underground and indie comics, and to zines, and to publications like Seattle’s Intruder which is entirely comics and art. (Intruder will soon publish its final issue after a pretty amazing run.) This book fits right in with works such as Rick Griffin’s Man from Utopia. It’s an art book, and I think my fellow comic book fans might dig it, too.

Peter works in several distinct styles, but most of his work fits in with what have recently been called zentangles. They are ornately detailed renderings of the plane along shapes which can be either swirling and chaotic, or geometric and orderly. You can make a zentangle out of something representational, or it can be abstract. And when you see Peter’s ink drawings, you can’t help but imagine coloring in all the tiny shapes.

Although I love this book, it may be a mistake to have it categorized in the coloring books category. It got some negative reviews for not really being a coloring book, and that sounds fair. On the other hand, many of the pieces in Line of Thought could totally work as coloring book pages, with a few alterations to the current format. That might include enlarging many of the pieces currently filling half a page (and thus sharing it with another piece). And, pieces with grey-scale shading could be omitted in favor of only pieces created in high-contrast black and white.

That’s not to say it would make me love the book any more, but it would position Deligdisch more accurately in the coloring books category. I’m perfectly content to pick up Line of Thought and flip through the pages whenever I need a reminder that anything is possible in art, that both chaos and order are beautiful and intertwined, and that it’s possible to create pure magic with only a pen and a piece of paper.

Buy Line of Thought by Peter Deligdisch in Paperback.