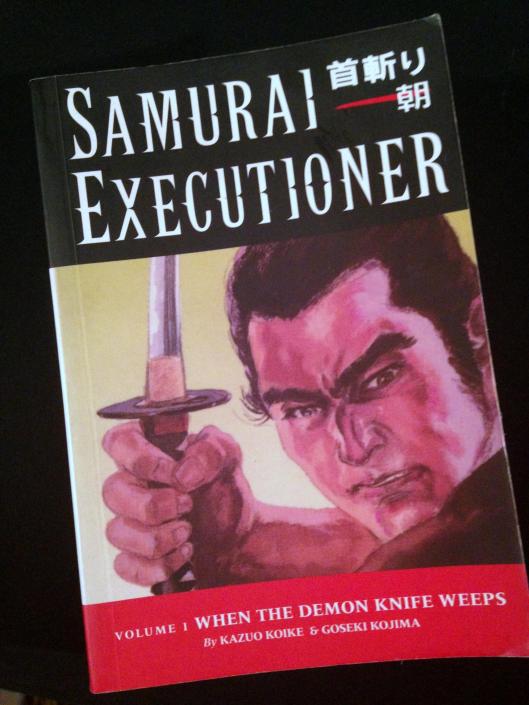 Our enthusiasm for Lone Wolf & Cub knows no bounds, so of course we grabbed a copy of Samurai Executioner the first time we saw it. This little paperback from Dark Horse looks and feels like one of their Lone Wolf books, also by Kazuo Koike and Goseki Kojima. In some panels, our protagonist even looks just like Itto Ogami from Lone Wolf, and he pretty much has the same job. But, without young Daigoro and the evil Yagyu clan defining this book, the creators can indulge their love for a good samurai tale with different kinds of plot lines. 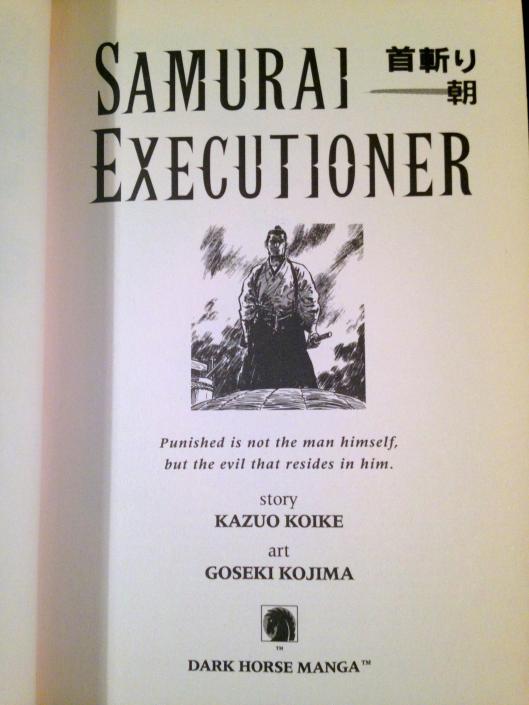 This creative team’s productions draw on Japanese history and culture from before the time Tokyo was established. At the time of these stories, that city was Edo. 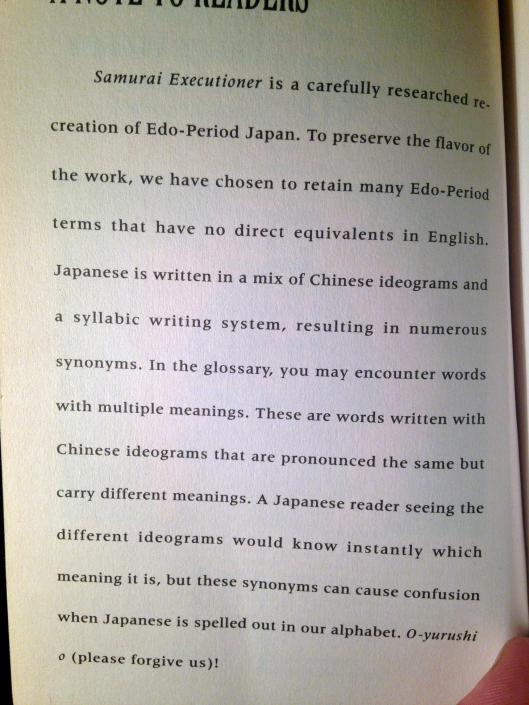 This paperback collects five sequential “issues” of Samurai Executioner in more than 330 pages.

Koike and Gojima seem to delight in wringing the maximum emotional drama from each scene. No one in these stories merely has a rough day. One can easily see how these manga classics affected Frank Miller’s approach to comics with their over-the-top intensity, excessive violence, and no-holds-barred confrontations with total trauma. Take the opening sequence, for example. 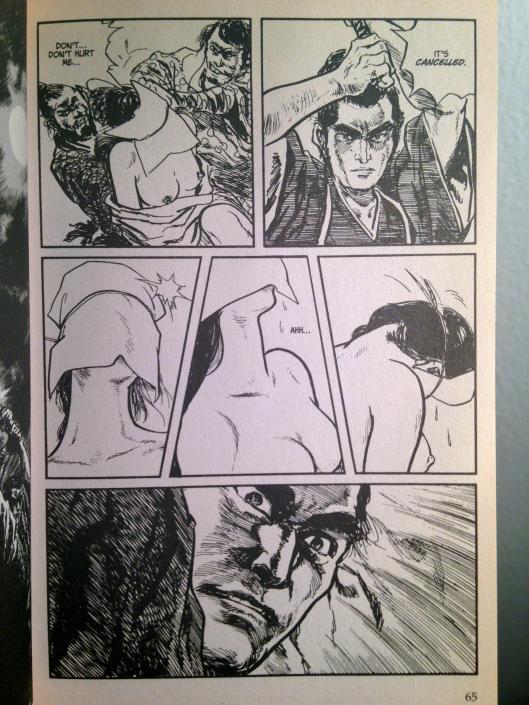 Our main character begins the tale in a sexual interlude with a prostitute. They share a tender moment, and we learn he has to execute someone the next day as a kind of job interview. Well, guess who they bring in to get the old slice-and-dice? That’s right. The woman our samurai was just mating with the night before. Ugh.

See, we told you nobody here just has a rough day. 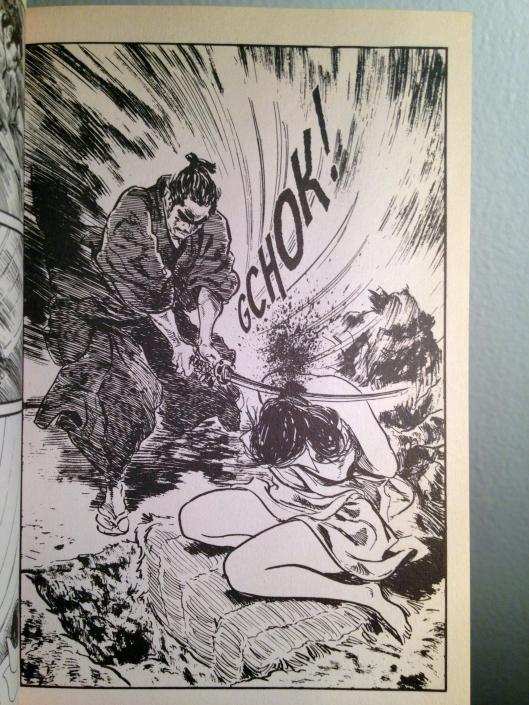 Our samurai mans up and chops her head off, but he whispers to her that the execution has been cancelled. She breathes a sigh of relief, free from any more worry or suffering. And then CHOP! This moment of mercy irritates the guys at the job interview, who remind him that suffering is part of the punishment he should mete out for them. What dicks! 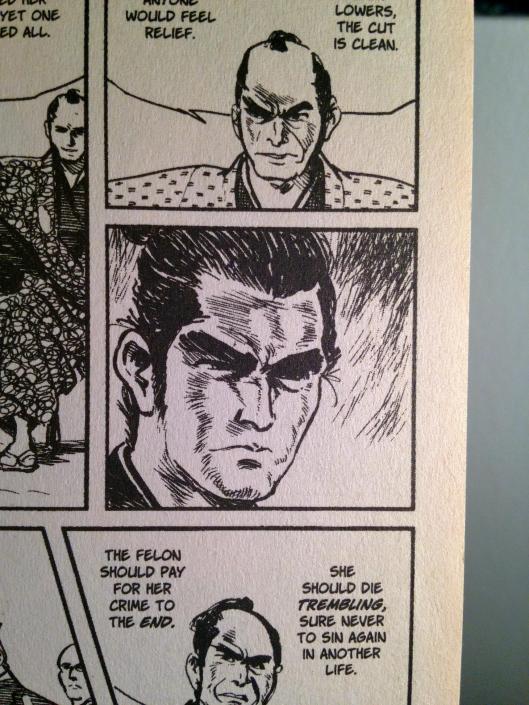 Compared to that job interview, the samurai executioner’s first day on the job doesn’t seem so bad. He gets dispatched to deal with some raving lunatic who has taken a nice young girl hostage. Koike and Gojima take us inside the madness in rather disturbing scenes where the captor forces his hostage to sustain him with her urine. They also gave us horrifying urinations in Lone Wolf, when the poisoner routinely drank the urine of the drug-addicted whores in his employ.

Now, we’re not really big fans of drinking pee, but a human could reasonably chug a shot of it without much emotional trauma. But in Samurai Executioner, it’s pretty much your worst nightmare in hell, an act performed at the hostile mercy of some psychotic sicko. Maybe they need to consider adding a chaser!

So, between the decapitated hookers and the pee-guzzling antagonists, between the merciless mayhem and mandatory mutilations, Samurai Executioner managed to completely blow our minds. Even knowing the story doesn’t prevent us from some amount of shock every time we re-read it.

If you want some light-hearted family-friendly entertainment, this is not the book for you. If you get your kicks from action movies with hardcore heroes and utterly twisted villains, buy Samurai Executioner in paperback! Or, see if you can grab the new Samurai Executioner Omnibus in May 2014 from Dark Horse! The first omnibus will collect the first three paperback volumes!