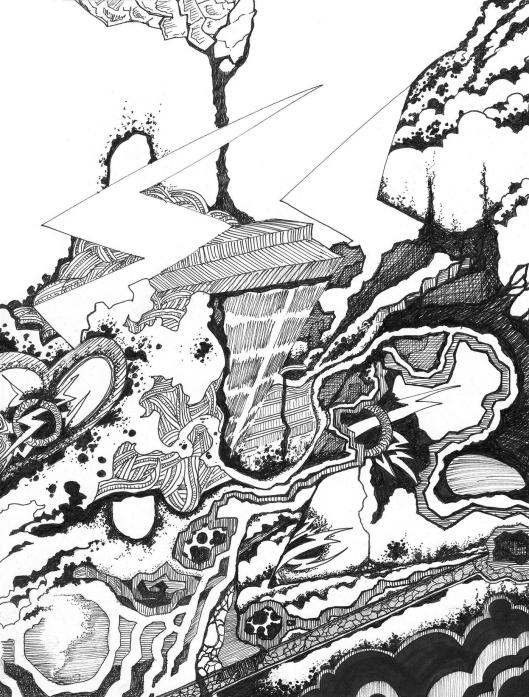 We began this 8.5 x 11 mega-doodle as a study of Ian Miller’s line work in the illustrated edition of The Martian Chronicles by Ray Bradbury.

It soon took on a life of its own! Peter Deligdisch advises “keep calm and draw lines” in his collection Line of Thought, a work that Amazon groups with “zentangle.” We hadn’t heard of zentangle before, but that’s exactly what our art teacher called it when we started making textures with tons of lines. It may be a hot new art thing, but dig the way Ian Miller zentangled us on the road to Mars decades ago.

We like the energy effects and dynamic lightning bolts in the heart that Miller drew for the chapter called May 2003: The Wilderness. By drawing lines in one direction or the other, Miller creates distinct spaces and shapes. The lines serve as texture to give the area form or identity. Miller uses stippling and tiny circles to achieve a tasty variation of our favorite thing in the universe: Kirby Krackle. And, because so much of the page is “textured” or rendered, his empty white spaces also become solid objects. We have long admired this artwork, and approaching it analytically with the right tools for the job turned out to be fun and educational.

The Ian Miller edition of the book includes this quote from the Bradbury text as a preface: And somewhere between Mars and Earth everything of the message was lost… and his voice came through saying only one word: “Love.”

Here it is framed: 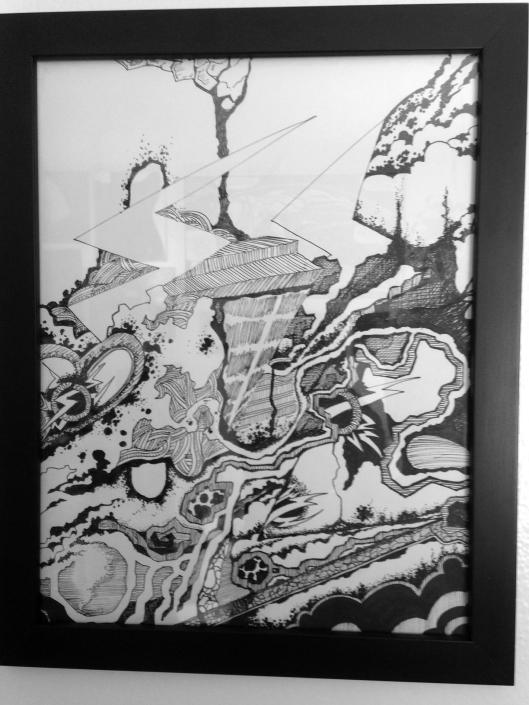 And here is an early version where we almost stopped and left negative space in the lower right corner. But, something told us to press on.

1 thought on “Somewhere Between Mars and Earth!”