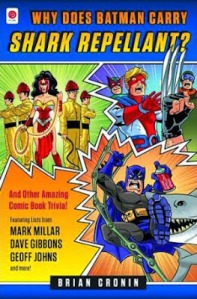 The inexplicable joys of a lifetime of reading comic books include a massive mental library of details about completely fictional realities. That’s why Brian Cronin’s new book came as such a surprise. Just when we thought we had all the jewels of knowledge our geek crown could hold, Why Does Batman Carry Shark Repellent? took us back to superhero school.

Brian Cronin organizes the book in the ever-popular list format covering everything from Six Notably Recalled Comic Books (Superman drinking beer with Pa Kent got pulled and pulped) to Six Near-Death Incidents for Aunt May. Some of the lists, like the Top Ten Comic Writers of All Time, come from fan votes at Comic Book Resources. CBR hosts Cronin’s Comics Should be Good blog which, according to the book notes at Amazon, gets 30,000 hits per day. Got blog envy yet?

Shark Repellent also boasts two dozen guest entries from big names in the comics industry. Greg Pak discusses his favorite non-white characters. We’re glad Robbie Robertson made Pak’s list! Mark Millar describes five “WTF?” moments in comics, and we learn why his friends still kid each other with the line, “You know what you have to do if you want to see Star Wars!” Zeb Wells, Skottie Young, Mike Deodato, Dave Gibbons, Geoff Johns, and many more writers and artists contribute their insights, inspirations, and anecdotes.

So what did we the keepers of the Martian flame of ultimate comics knowledge learn from Shark Repellent? We learned why Johnny Carson offered a televised apology to Jack Kirby. We learned how Steve Epting broke into comics by responding to a contest that never existed. We learned the miniature dog ads that puzzled us for years turned out to be a complete scam. We learned we missed the William S. Burroughs Nova Express reference in Watchmen.

So, whether you think you know it all or you just love reading top-ten style lists about our shared passion, pick up Why Does Batman Carry Shark Repellent? in paperback or Kindle edition. Who knows? You may find inspiration for a few lists of your own!