Welcome to the Second Quarterfinals Round of The T-Rex Beat Down: March Madness with Tyrannosaurs! Join us every day through April 2nd as eight fearsome tyrannosaurs fight for the world T-Rex championship title!

T-Rex Beat Down is a co-blogging series presented in partnership with The LongBox Graveyard, who brings you today’s exclusive play-by-play.

Today’s prehistoric powerhouses: The original 1933 T-Rex from Skull Island and 2000 AD’s Old One Eye! We invite you to cast your own vote for this match. Will your favorite Rex rule the day, or be crushed in the jaws of death?!? We’re about to find out!

As our two Cretaceous contestants approach the Colosseum, let’s take a moment to catch The Tale of the Tape:

Old school! Created for the 1933 film King Kong, the T-Rex of Skull Island is not quite the first, but certainly the greatest black & white film Tyrannosaurus. He would have been king of Skull Island if not for that meddling ape! His battle with King Kong set the bar for every stop-motion dinosaur beat-down to follow! His cry sounded scary as hell. He did a somersault over King Kong’s back, and he had a taste for the ladies, too. Weakness: There’s no denying it, this T-Rex had a glass jaw. A couple right crosses from the big gorilla put the T-Rex down. Then, it was only a matter of time before Kong tore open the Rex’s face in a gout of black blood and sound so gruesome that, seventy-five years later, audiences still look away in disgust. It was the Joe Theismann leg break of Tyrannosaurus kills!
Let’s have a look at the memorable battle from Skull Island:

Created by Pat Mills, Old One Eye appeared in 2000 AD #1-19, in the Flesh storyline. Fueled by rage, the “Queen of the Dinosaurs” killed all of her human and reptilian foes – even the time-traveling humans armed with planes, guns, and knives. Unbeatable in her day, hailed as the “greatest monster of all time,” Old One Eye eventually died of natural causes at 120 years old in the Tyrannosaur Graveyard. But, even her lifeless bones killed scientists who studied her fossil! Weakness: She does have a blind side.
Let’s get a taste of the rage inside this monster: 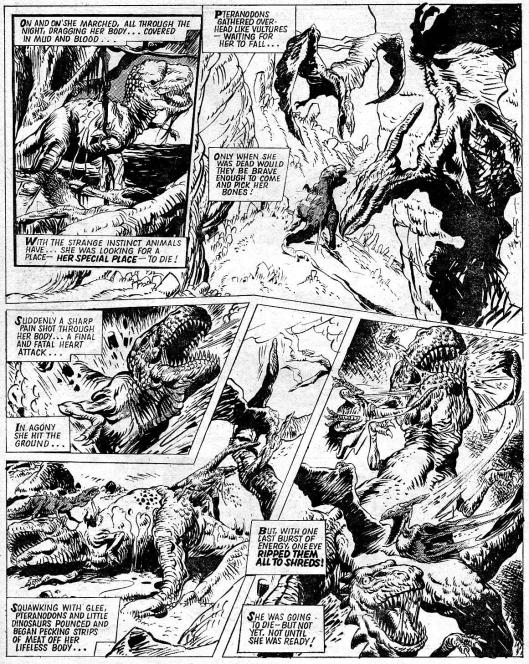 And there’s the starting bell! Let’s go to the ring for the Play By Play!

Kong Rex feels every one of his eighty years. He can’t believe he has been called upon to fight! He belongs in a museum… not here, among these young, rampaging monsters. Punk kids. Cartoon dinosaurs and computer-generated simulacrums. Only he is real, only he is genuine. And he might have been a contender, if not for that cursed King Kong, the master of Skull Island.

Coulda, shoulda, woulda… the life of Kong Rex has been one of manipulation and injustice. He was literally a puppet, made to take a fall for the glory of that absurd ape! As if a gorilla could fell a T-Rex with a blow to the head. They said he had a glass jaw, but it was a fix! The animators made him do it, matching him in battle with King Kong, controlling his every movement, an inch at a time. Move! Hold still! Move! Hold still! Again and again and again, through all the long weeks and months, all the time knowing his fight with the ape must end with his preordained and entirely unwarranted defeat.

And with that breaking of his snout! Ugh!

He deserved better. And seventy years ago, he might have won a rematch. Even fifty years ago, he could have made short work of a Gwangi, or a Jurassic Rex. But Kong Rex is old. Stiff-kneed, black and white, old – he knows his hours are numbered.

His opponent is Old One-Eye, a living, breathing beast from the dawn of time, the most fearsome T-Rex in prehistory. She is vicious, strong, battle-scarred from innumerable contests to the death with the numberless dinosaurs that foolishly opposed her right to rule. What an opponent to draw in the first round! Kong Rex has no chance. None. He could have been a contender… but the Fix was in. Again. Coulda, shoulda, woulda…

But with the dignity befitting his legacy as not quite the first, but certainly the greatest screen T-Rex for half a century, Kong Rex strides boldly into the arena. He won’t let the bastards see him sweat. He unleashes his hellish, snake-like cry, and shivers his tail like a sinuous serpent. Still terrifying, after all these years! And for a moment, at least, the Old Grey Rex is in his glory. For a moment, he is young again, the unchallenged master of Skull Island (aside from THAT APE!)

And what is this? Old One-Eye… is bowing? It’s unprecedented! This savage bitch from the unholy past is showing… respect? She must know – must understand – how much old Kong Rex meant to generations of T-Rex fans, how he set the bar for Tyrant Lizards in those long, lean years before comics and movies came to truly give dinosaurs their due. Kong Rex was the light in the darkness. Kong Rex should have a star on Hollywood Boulevard!

Kong Rex closes his eyes, nods slightly, acknowledging this unexpected tribute. Maybe, after all, his life has not been a waste.

The starting horn is still echoing when Old One-Eye bitch-slaps Kong Rex across the arena with one swipe of her mighty tail. Kong Rex lands heavily, his back broken. Old One-Eye is upon him, biting and clawing. Kong Rex howls his last – not the jaws, not again! But, it is too late. Old One-Eye has exhausted her limited supply of empathy. She wedges her foot in Kong Rex’s mouth, and then fixes her jaws on Kong Rex’s snout. She levers open Kong Rex’s jaws, pulling them impossibly wide… wider… wider still!

A sickening crunch and a gout of black blood and it is done. Again. Kong Rex lies lifeless on the floor of the arena, his face a bloody ruin, his jaw broken at an impossible angle. He should have been a contender. Coulda, shouda, woulda…

ROUND TWO WINNER: Old One Eye!
Come back tomorrow for ROUND THREE: Devil Dinosaur versus the Telepathic Tyrannosaur!

7 thoughts on “T-Rex Beat Down, Round Two: Old One Eye vs. the T-Rex of Skull Island!”